The marketing and corporate communications specialist rose on a solid third-quarter report. Here's what investors need to know.

Omnicom Group (OMC -0.53%) announced another stronger-than-expected quarter on Tuesday morning, highlighting continued modest organic revenue growth and an expected decline in revenue from acquisitions, net of dispositions, over the past year.

With shares of the public-relations and marketing leader up around 2.2% on the day, let's take a deeper look at how Omnicom kicked off the second half of the year. 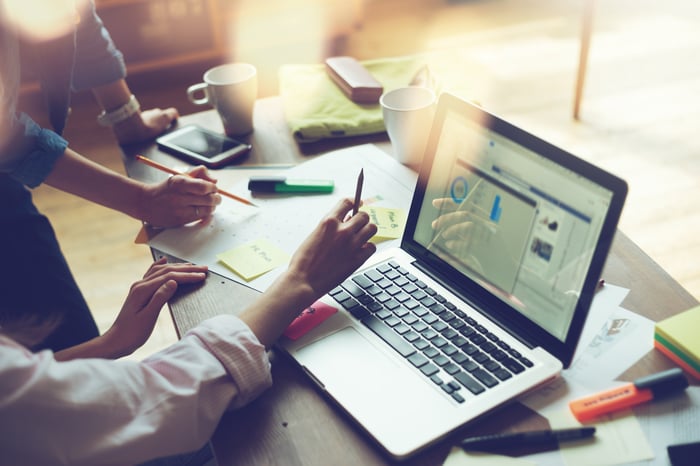 During the subsequent conference call, Omnicom CEO John Wren reminded investors that the disposition process the company started in the fourth quarter of 2016 was "substantially completed" by April of this year. That means Omnicom will still be lapping that process in its financial statements through early next year.

In addition, Omnicom is striving to help some of the world's largest brands navigate the effects of technological disruption across multiple industries. But more than anything, this could be a perfect chance for Omnicom to demonstrate its relative strength.

Given the challenges many of our clients are facing, there is a significant opportunity for Omnicom to help them transform the way they approach their customers. Marketing needs to be tied into advertisers' broader strategy, including sales, service, product innovation and other functions with the consumer at the center. With this in mind, we continue to transform the way we are organized in a manner that allows our management, people, and agencies to effect change by offering clients the most creative minds with access to the latest tools in the marketplace.

Omnicom doesn't offer specific forward revenue or earnings guidance. But Wren did warn that visibility tends to be limited in the fourth quarter by a seasonal rise in less predictable project work.

Later in the call, CFO Philip Algelastro stated that Omnicom anticipates that foreign exchange will have a roughly 2% positive impact on sales, assuming rates stay constant, while the impact of acquisitions, net of disposition activity, should reduce revenue by 4.75%.

All things considered, this was another unsurprising -- if slightly better-than-anticipated -- quarter from Omnicom as the company builds its enviable portfolio of agencies through strategic acquisitions, and evolves its business to better suit the needs of its clients. As such, I think long-term investors should still be more than happy with Omnicom's position today.