The sportswear behemoth's current course is arduous, and it might be a few quarters before Nike starts to sprint again.

If you were trying to dream up in advance how Nike's (NKE -2.13%) multiyear deal as exclusive provider of game apparel to the NBA might launch with an inauspicious gaffe, it would be hard to top what actually happened last week, during the season opener between the Boston Celtics and the Cleveland Cavaliers. On a rather routine defensive clutch by the Boston Celtics' Jaylen Brown, the back of superstar LeBron James' jersey ripped straight down the middle. James is of course, one of Nike's very biggest endorsers, with a lifetime contract said to be worth over $1 billion.

The incident surely spooked those Nike investors with a superstitious bent, following so closely behind news that the company had initiated an uncharacteristically deep flash sale of up to 40% on footwear products in order to work down its inventory. While it's still the dominant sneaker and sports-apparel company across the globe, a recent Piper Jaffray survey shows that Nike is losing some market share -- and mindshare with teens -- to rival Adidas, as well as to streetwear brands like VF Corp.'s Vans label. This slight bit of brand slippage is reflected in the company's most recent quarterly report, which revealed a sales decrease of 3% to $3.9 billion in North America, the company's largest market. 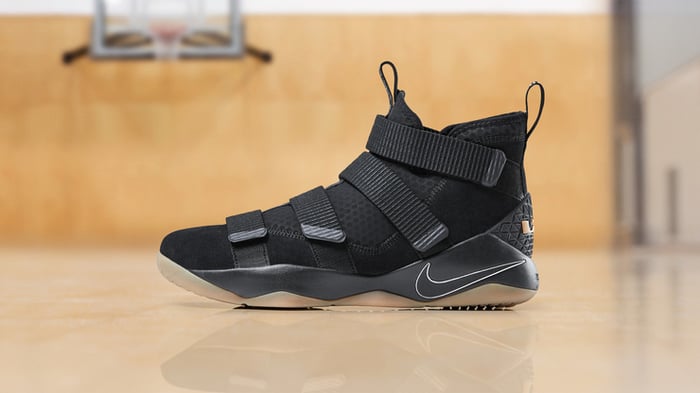 The flash sale, which follows a warning by some analysts that Nike may be experiencing a glut of product on store shelves, should cause shareholders to pay attention to the inventory account. Over the last several years, Nike's days inventory outstanding (DIO), a measure of efficiency that tracks the average time a company holds inventory before selling it, has climbed from around 85 days to around 95: 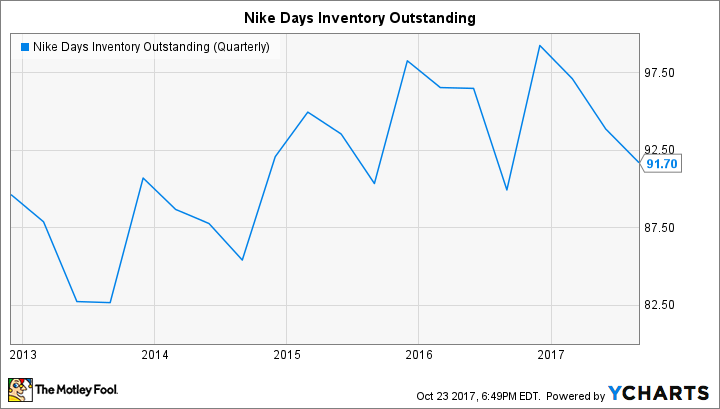 The very last data point on this chart, 91.7 days, should be taken in context. As you can see from past years, this is an annual low point which occurs during the fall, as the company sells more inventory to wholesalers in advance of the holiday season.

Up until now, Nike hasn't had to worry about the slow upward creep of its DIO, or the fact that inventory has grown at a slightly faster cumulative rate than revenue over the last ten years:

For most of the last decade, Nike has created demand through constant innovation, and management has ensured there's enough product on hand to meet that demand. Thus, inventory always runs slightly ahead of revenue on Nike's books, and the time it takes for that inventory to turn over hasn't been a cause for concern.

Yet several factors combine to signal that October's 40% sale might not be the last of promotional activity from The Swoosh. A hint of fatigue in the perennially strong Jordan brand, sales disruption in the form of store closings by some of Nike's retail partners, and shifting millennial tastes all hint that management may stray from its usual strategy of realizing full price. Doing so can more quickly make way for next-generation products, and is in line with Nike's newly announced tighter focus on customization and direct-to-consumer (DTC) sales.

We see the consumer shifting to digital and to deeper brand connections, and we believe that's a tremendous growth opportunity over the medium to longer term, and actually will fuel some of our growth in the short term. So our measure of success in North America in fiscal year '18 will primarily center around accelerating our direct-to-consumer businesses, and also accelerating the work that we're doing with our strategic partners to reshape the broader marketplace.

A focus on DTC revenue ensures that Nike can continue to garner premium price points, while fostering brand loyalty and increasing its lifetime revenue per customer. But the transition may not be smooth. And it's very possible that the second and third quarters of fiscal 2018 will reflect a higher cost of goods sold, and thus lower margin, if Nike continues to discount its current lines while it tweaks its mix of direct and retail distribution. In other words, the company may take a few deep breaths before finding a second wind in the current year.

Meanwhile, we can be sure that Nike is working fast to fix those high-tech NBA shirts. LeBron James' torn jersey doesn't symbolize Nike's shortcomings so much as its spirit of innovation and risk-taking. The jerseys themselves are made of advanced polyester that derives from recycled plastic -- each garment contains the equivalent of approximately 20 plastic water bottles saved from a landfill. They're embedded with NFC (near-field communication) devices which, based on player movement, allow fans to unlock premium content on their favorite players with Nike's new "NikeConnect" app. This is the type of customer connection, and higher profitability, that Nike is aiming for as it plots out its next sprint.