Shares of Tokyo-based social-media service LINE Corp. (LN) soared on Wednesday, rising as high as 16.3% above Tuesday's closing prices before backing down to a 12.5% gain at the closing bell. The company reported third-quarter results in the early morning, showing solid revenue growth.

In the third quarter, LINE's top-line sales increased 18% year over year to land near $374 million. Earnings per diluted share and American depositary receipt stopped at $0.07, down from $0.11 in the year-ago period. Thanks to a strong posting in the second quarter, LINE's year-to-date earnings more than doubled year over year. 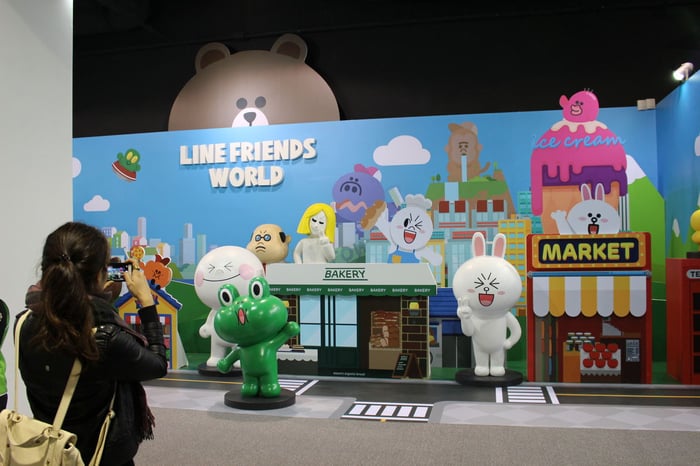 In a prepared statement, LINE's management said there's an end in sight to economic and regulatory pressures in key markets such as Taiwan, Japan, and Indonesia. That's good news for LINE, because optimistic consumers buy more smartphones and that's where the company's messaging apps collect their revenues. LINE is exploring new revenue streams these days, including a mobile-game development operation and a small indoor theme park in Taiwan.

LINE shares have performed a strong bounce from February's trough. In turn, that was a correction from an overheated IPO in the summer of 2016. I don't know where this stock is going next, but I have a good idea of who LINE's management wants to be when the company grows up.

Why Line Stock Popped 26% on Wednesday

Tencent and Line Team Up to Counter Alibaba in Japan
370%