Disneyland reveals plans for a new hotel. It won't open until 2021, but the theme park leader is already working on new ways to fill those 700 vacancies.

Walt Disney (DIS -1.13%) is working on some pretty amazing things that will be coming to Disney World in the next few years, but on Wednesday it unveiled something shiny and new for its original Disneyland resort in California. Disney announced that it will break ground next summer on a new 700-room hotel that will open in 2021.

The new unnamed hotel will be going up at the west end of its Downtown Disney shopping, dining, and entertainment district that feeds into the entrances of its two Anaheim theme parks. The new hotel means that Disney is scrapping plans for a controversial 6,900-spot parking structure and transportation hub that it was originally planning, though the new hotel does come with plans for a slightly smaller parking garage. 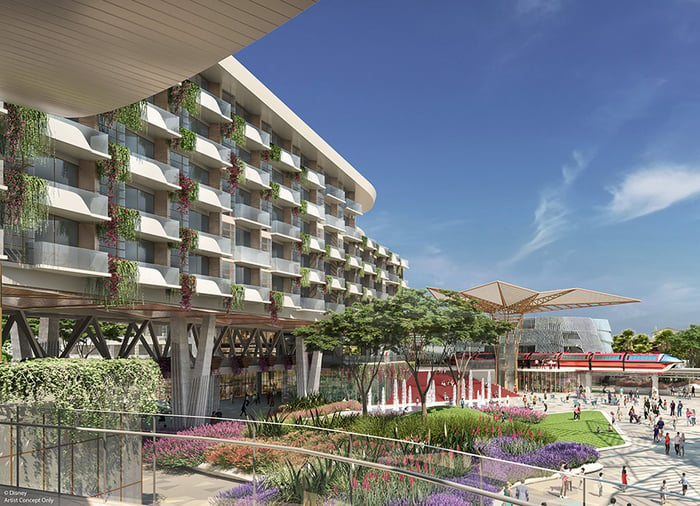 And they slept happily ever after

Lodging is a pretty big deal for Disney. It generates incremental revenue, of course, but it also keeps guests on-site. One of the reasons why Disney acquired so many tracts of lands in Central Florida in the late 1960s was to build as many theme parks and resort hotels as it deemed necessary. There are more than 30,000 rooms across Disney World's various resorts, and more lodging options are coming.

Disneyland, on the other hand, has just a little more than 2,400 rooms across its three resorts. The new hotel when it opens in four years will dramatically improve its occupancy levels.

Disney isn't exactly neglecting its original resort. It opened the well-received Guardians of the Galaxy-themed thrill ride earlier this year. Star Wars Land will raise the bar in early 2019. Land limitations have kept growth in check, unlike the broader canvas it has to paint on in Florida.

The media giant could use the new additions. Theme park attendance declined at all six of its domestic theme parks last year, according to industry tracker Themed Entertainment Association, and the trends have been sluggish so far through 2017. Disney's theme park business is still generating modest revenue and segment operating income growth as it boosts ticket prices and hotel rates, but getting more guests through its high-tech turnstiles is the ultimate key to sustainable growth.

Ideally, Disney investors won't have to wait four years for the new hotel to open to achieve that turnaround. New rides and attractions and deeper integration of Disney's acquired theatrical franchises will hopefully turn things around well before then. However, if Disneyland attendance does move higher in the coming years, it's good to know that it will have another 700 rooms to keep its customers close come 2021.