The e-tailer's stock jumped more than 13% on a stellar earnings report with a side of optimistic holiday-quarter guidance.

Shares of Amazon.com (AMZN 3.15%) soared in Friday's trading session, boosted by a great third-quarter earnings report. The e-commerce and cloud computing giant crushed Wall Street's expectations and its own guidance across the board. Amazon shares surged 13.7% higher as of 1 p.m. Eastern time, setting fresh all-time highs in the process.

Amazon's net sales rose 34% year over year, landing at $43.7 billion. The recent acquisition of grocery store chain Whole Foods Market contributed $1.3 billion to this tally, having closed four weeks before the end of the reporting period. Adjusted earnings held steady at $0.52 per diluted share. Your average Wall Street analyst would have settled for earnings of $0.03 per share and sales in the neighborhood of $42.1 billion.

The company's revenue guidance for the quarter topped out at $41.75 billion. After backing out the Whole Foods portion and currency exchange effects, Amazon's net sales still landed above that guidance range, stopping at $42.1 billion. The company also exceeded its operating profit target by $47 million, or 16%.

Looking ahead, analysts had been expecting fourth-quarter sales of approximately $59 billion. The midpoint of Amazon's guidance for that period now sits at $68 billion, including a $4.4 billion Whole Foods contribution. Any way you slice it, that's an optimistic forecast. 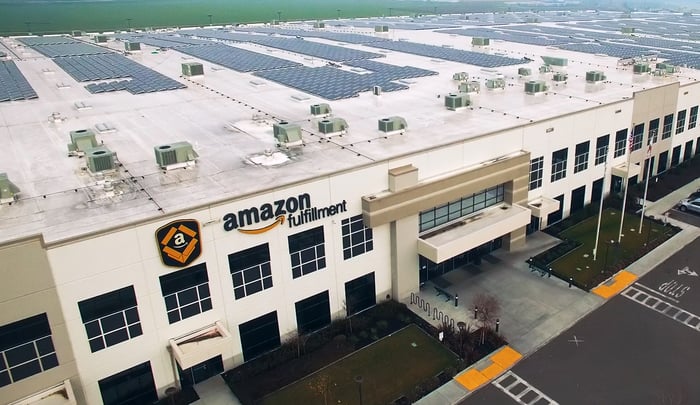 The e-tailer is investing billions of dollars into its delivery and fulfillment network these days, driving free cash flows 33% lower along the way but building a stronger runway for future growth. Even so, Amazon collected $3.5 billion of free cash in the third quarter, roughly 10 times the operating income metric. If cash is king in the retail industry, this is the company you want to own.