Though the House of Mouse has had a tough couple of years, now's a great time to buy the biggest name in entertainment.

When one thinks of typical childhood rites of passage, watching Cinderella or Bambi with your family, and a vacation to Disney World come to mind for many Americans. But did you know there's much more to The Walt Disney Company (DIS 1.84%) than that? Today, Disney is a sprawling juggernaut that owns many of the world's most powerful entertainment brands.

Under current CEO Bob Iger, Disney gobbled up Pixar, Marvel, and Lucasfilm, growing the company into the industry leader with a market capitalization of over $150 billion. It's also got ESPN, the most popular sports channel worldwide, and one could say Disney has a dominant presence in just about every child's life, whether he or she wants to become a superhero, princess, sports star, or anything in between. 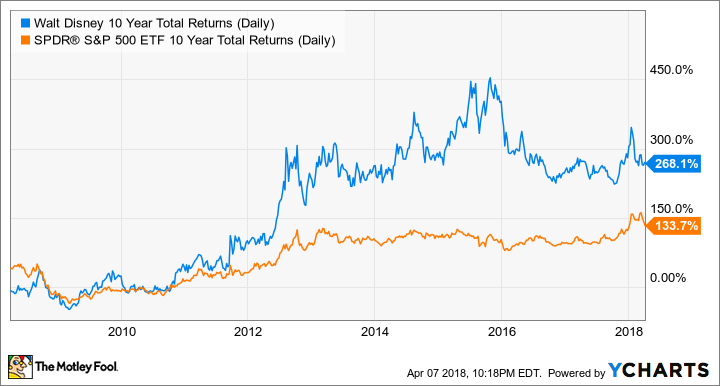 Even with these all-powerful brands and massive scale, the company trades at just 16 times forward earnings, a discount to the broad S&P 500. Moreover, shareholders collect a 1.6% dividend yield, which is almost certain to grow over the coming years.

So let's assume you want to buy shares of Walt Disney. How do you do it? First, make sure you understand the investing basics laid out in The Motley Fool's guides on how to sign up for an online brokerage account and how to buy your first stocks. Once you have the basics down, your priority shifts to researching the company and understanding why it should remain a great stock to own for the long term.

Although Disney is well-known for Mickey, Dumbo, and Simba, its famous film studios only make up the company's third-biggest division. Here's a breakdown of the Disney empire:

Of course, while media networks is the biggest division -- and ESPN the biggest part of that -- you can also think of the theme parks, studios, and consumer products businesses as all part of a Disney-branded operation.

It is hard to understate just how dominant this "core" Disney business (studio + parks + consumer) has become under CEO Bob Iger. He first joined Disney in 1995 when the company acquired Capital Cities, owner of both ABC and ESPN. Iger was President of ABC, and at the time, Disney was seen as a company in turmoil. Jeffrey Katzenberg, the creative force behind Disney's mid-'90s revitalization, had left to form his own studio, Dreamworks Animation. To make matters worse, the company's No. 2 executive, Frank Wells, had died in a helicopter accident in 1994.

Iger would go on to succeed then-CEO Michael Eisner in 2005, and he quickly set about growing the company's branded portfolio with the acquisition of Pixar in 2006, including its creative genius, John Lasseter. That move not only brought intellectual property such as Toy Story into the Disney fold, but Lasseter and his team also rejuvenated the company's core Disney franchise, leading to more recent hits such as Frozen.

Iger followed Pixar with the purchase of Marvel Entertainment in 2009, then the huge $4 billion acquisition of Lucasfilm in 2012. These acquisitions have been absolute home runs, with Marvel franchises becoming mainstays at the box office, and the two new Star Wars films becoming the biggest box office hits of both 2015 and 2016. In fact, three out of the top-grossing five movies released last year came from Disney brands.

And the good news doesn't stop there. Disney is also incredibly adept at leveraging its intellectual property, especially through its parks & resorts division, which opened a brand-new attraction in Shanghai in 2016. This segment is actually bigger than the studio business, with parks in Orlando, Paris, Tokyo, Hong Kong, and Shanghai, as well as its very own cruise line.

Why now is a good time to buy

Despite all this good news, Disney's stock has declined over the past two years, largely due to weakness in its large media networks business. ESPN is the most expensive channel in the traditional cable bundle, which means it's heavily affected by cord-cutting, which is only accelerating. Moreover, Disney has paid hefty prices to retain sports rights for the NBA and NFL, and the company's other networks such as The Disney Channel have also experienced declining ratings. As you can see, this has led to a significant drop in the media networks segment's operating income in over the past year:

The good news is: Disney is not standing idly by. In early 2017, the company acquired BAMTech, which makes technology for streaming live sports. Disney plans to use its capabilities to create its own Disney-branded streaming channel and an ESPN-branded offering as well. The company is also in the process of acquiring most of Twenty-First Century Fox for $52.4 billion in stock, which will give it the Avatar, X-Men, and Deadpool franchises (to bolster the studio), a host of local and international sports channels (to bolster ESPN), and much more TV production capacity, as well as majority control of Hulu (to help it take on Netflix).

This may help it offset the effects of cord-cutting and also lead to even more profitability down the road. As Netflix has shown, a streaming channel with strong brands and proprietary content can be very successful, both in the U.S. as well as abroad.

Also, the drop in the studio and consumer segments is because Disney released fewer films in 2017 versus 2016, not because of any problems in its film division, which continues to churn out hit after hit.  In fact, Marvel's 2018 megahit Black Panther just passed Titanic as the third-highest grossing movie of all time.

Still, the uncertainty has caused Disney's stock price to languish, even as it's making prudent moves to position itself for the future. That makes today a great entry point for long-term investors.