Shares of Yum! Brands (NYSE:YUM), which boasts more than 44,000 restaurants in 135 countries under the KFC, Pizza Hut, and Taco Bell brands, were up 7% Thursday at 10:45 a.m. EDT after management released solid third-quarter results.

Starting from the top, total revenues declined 5% to $1.44 billion but managed to top analysts' estimates calling for $1.39 billion. Third-quarter earnings per share checked in at $1.18, a 115% increase over the prior year, but adjusted for one-time items was a more modest 22% gain to $0.68 earnings per share. That's still a strong result and ahead of analysts' calling for $0.67 earnings per share. Putting the financials aside, some investors could be taking a sigh of relief after management said Pizza Hut saw no negative impacts from the NFL protests that Papa John's (NASDAQ:PZZA) had blamed for slightly weaker sales earlier this week.

"As we celebrate both our 1st anniversary from the spinoff of Yum China and our 20th anniversary as an independent company, I am proud of our accomplishments. I'm especially proud of our ability to leverage our culture to rapidly transform to a more focused, more franchised and more efficient company which delivers more growth to our shareholders," said Greg Creed, Yum! Brands' CEO, in a press release. 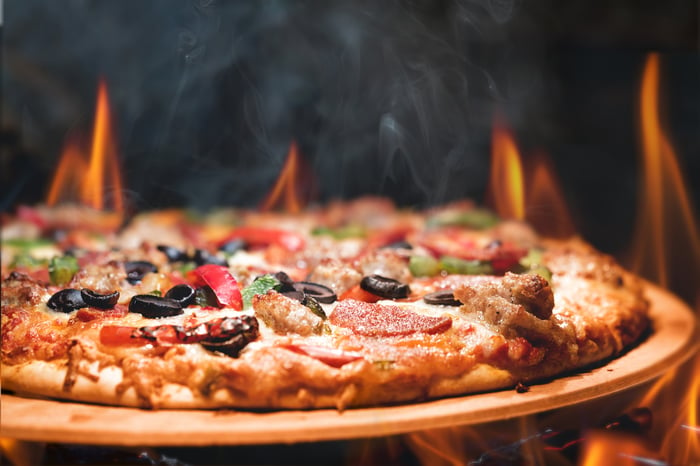 Management also noted the company was still on pace to reach its multiyear goals that include being at 98% franchisee ownership in 2018, reducing costs, and improving U.S. same-store sales by boosting online sales, among other targets. If the company can continue executing on its multiyear strategy as it has recently, expect more solid quarters from Yum! Brands.

Shares of Yum! Brands Pop 7% After NFL Protests Have No Impact on Sales @themotleyfool #stocks $YUM $PZZA Next Article
Current