Please ensure Javascript is enabled for purposes of website accessibility
Log In Help Join The Motley Fool
Free Article Join Over 1 Million Premium Members And Get More In-Depth Stock Guidance and Research
By Beth McKenna - Updated Nov 5, 2017 at 10:46AM

Issues with the Model 3 production ramp took center stage when the electric-car maker reported its third-quarter results and outlook.

Shares of Tesla dropped 6.8% on Thursday. We can attribute the decline to the company posting an earnings loss considerably wider than Wall Street was expecting and concerns over the delay in reaching the Model 3 production target of 5,000 vehicles per week. News out during the trading day that House Republicans want to abolish the electric-car tax credit was probably another factor in the stock's decline.

Here are six things you should know about Tesla's Q3 report and outlook: 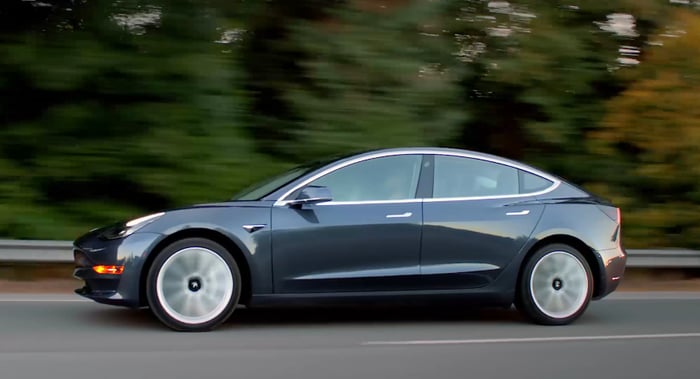 The launch of the Model 3 -- the company's first car aimed at the mass market – is the reason all the profitability numbers are much worse than in the year-ago quarter. The vehicle began shipping in small quantities in July.

Wall Street was looking for Tesla to post an adjusted loss of $2.30 per share on revenue of $2.94 billion. So Tesla met revenue expectations, but its loss was much wider than analysts expected.

Tesla used $300.6 million of cash in operations, driven by capital expenditures for the Model 3 launch and Gigafactory 1 in Nevada. By comparison, the company generated an operating cash flow of $423.6 million in the year-ago quarter. It ended the quarter with $3.5 billion of cash on hand.

Model 3 production goal of 5,000 vehicles per week pushed back a quarter

We knew going into earnings that Model 3 production was behind schedule, as Tesla shared Q3 vehicle production numbers in October. So it didn't come as much surprise that Tesla pushed back the timeline for achieving a production rate of 5,000 Model 3s per week. The company now expects to reach this milestone by late Q1 2018, rather than by December, as CEO Elon Musk said during the summer. The primary culprit is a bottleneck in battery module assembly at the Gigafactory 1 in Nevada, which the company has been feverishly working to address.

Tesla's success -- probably its survival -- hinges on its ability to efficiently ramp up production of the Model 3. So investors need to keep a close eye on Model 3 production numbers. At this early stage, I agree with Musk's comment on the earnings call that this move in the production target is "a small shift in the grand scheme of things." That said, there would be cause for concern if the ramp schedule continues to get pushed back. 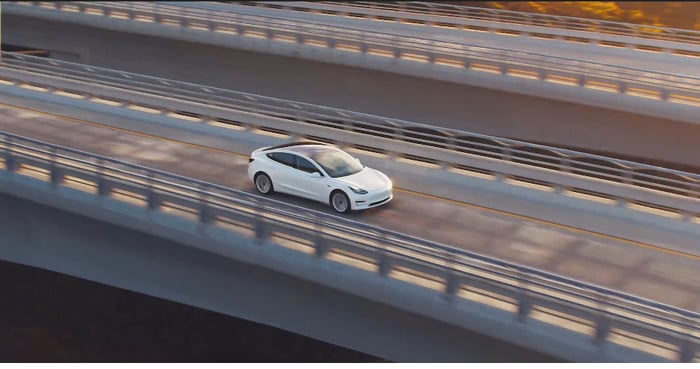 Tesla described the issue with the battery module assembly in its quarterly shareholder letter:

Four modules are packaged into an aluminum case to form a Model 3 battery pack. The combined complexity of module design and its automated manufacturing process has taken this line longer to ramp than expected. The biggest challenge is that the first two zones of a four zone process, key elements of which were done by manufacturing systems suppliers, had to be taken over and significantly redesigned by Tesla. We have redirected our best engineering talent to fine-tune the automated processes and related robotic programming, and we are confident that throughput will increase substantially in upcoming weeks and ultimately be capable of production rates significantly greater than the original specification.

Tesla's larger-than-expected loss was driven by the automotive adjusted gross margin declining more than analysts were probably expecting, as it dropped to 18.7 from 25.0 in the year-ago quarter. The decline was driven by four factors:

On the earnings call, Musk gave an update on Tesla's plans to open a factory in China. He said the "rough" target to start production is in about three years. Further, he added that the China factory would produce the Model 3 and probably the Model Y (a more affordable crossover vehicle, which is the next car the company plans to launch) for the China market and nearby markets.

Tesla expects to deliver about 100,000 combined Model S and X vehicles in 2017, a 30% increase over 2016. It plans to produce about 10% fewer of these vehicles in Q4 compared with Q3 to reallocate some of its manufacturing workforce to Model 3 production. Thus, the company will be drawing on its finished inventory.

The company expects Model 3 adjusted gross margin to reach breakeven by the end of Q4 because of increased production and expects that it will "improve rapidly in 2018 to [its] target of 25%."

Tesla expects the adjusted automotive gross margin to temporarily decline slightly in Q4 to about 15% and then rebound starting in Q1 2018. This is due to the higher mix of lower margin Model 3 deliveries in Q4 compared with Q3.