Please ensure Javascript is enabled for purposes of website accessibility
Log In Help Join The Motley Fool
Free Article Join Over 1 Million Premium Members And Get More In-Depth Stock Guidance and Research
By Eric Volkman - Nov 6, 2017 at 10:41AM

GW Pharma made an important move with its promising epilepsy treatment Epidiolex.

This year has been a real seesaw for shareholders of GW Pharmaceuticals (GWPH). Lately, that seesaw is tipping up slightly, following news that a cannabidiol-based drug candidate the company developed has been formally submitted to the Food and Drug Administration for review.

That's given some hope to a market that had been quite bearish on GW Pharma's prospects. Here's why.

Pot for a purpose

GW Pharma's drug candidate in question is Epidiolex, a treatment that, in the company's words, "is a pharmaceutical formulation of purified cannabidiol (CBD), which is in development for the treatment of several rare childhood-onset epilepsy disorders." Specifically, these afflictions are Dravet and Lennox-Gastaut (LGS) syndromes.

The company said it completed its FDA New Drug Application to market Epidiolex in the U.S. Additionally, Epidiolex has been granted the FDA's rare pediatric-disease and orphan-drug designations, plus the potentially very helpful Fast Track designation. 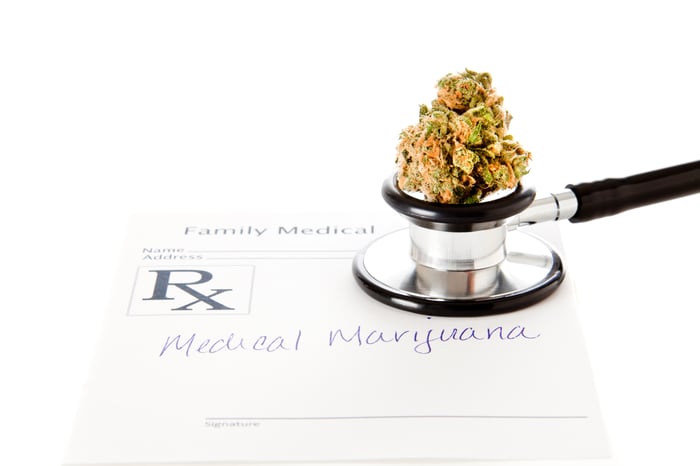 Cannabidiol is one of a number of cannabinoids (i.e. the chemical compounds found in marijuana), and it seems to possess certain healing properties. The one product GW Pharma has on the market is Sativex, a cannabidiol-based spray used to treat spasticity in multiple sclerosis patients. It's received marketing authorization in 21 countries, although the U.S. is not one of them yet.

GW Pharma knows its way around cannabinoids -- the company says it's been researching potential medical uses for them since its founding in 1998. In the case of Epidiolex, late-stage clinical trials of the drug indicated that it's effective in the treatment of both Dravet syndrome and LGS. That made GW Pharma an investor favorite among the small group of marijuana-associated stocks on the market.

However, the company fell a few rungs on the popularity ladder in late September when a small biotech, Zogenix (ZGNX), announced much better results from a phase 3 trial of its own Dravet syndrome treatment, fenfluramine -- which is not based on cannabidiol.

The recent Epidiolex announcement returned some optimism -- albeit of the cautious variety -- to GW Pharma's stock, even though the FDA submission was entirely expected by the market. Epidiolex may yet reach the market before Zogenix's fenfluramine, which still requires a late-stage trial before its NDA submission.

We should also remember that Epidiolex and fenfluramine were tested in separate clinical trials and did not go head-to-head, so their results are not necessarily comparable. Also, unlike GW Pharma and Epidiolex, Zogenix has not yet conducted trials on fenfluramine's effect on LGS.

Finally, since epilepsy patients often take more than one drug for their condition, there's a good chance that Epidiolex will be prescribed in addition to other treatments -- although there are concerns about its interaction with different drugs.

GW Pharma investors should keep in mind, however, that Epidiolex is still subject to scheduling -- i.e. categorization -- from the Drug Enforcement Agency. This is because marijuana remains a controlled substance at the federal level. As with any government agency, the DEA can take some time to complete a task.

Investors still have good reason to believe in the company's prospects. Epidiolex might not be the only game in town for its purposes, but it should be an important drug on the market, regardless. Still, investors interested in pot-associated stocks should certainly consider less risky alternatives.