Find out how natural disasters and tragic events plagued the company's quarter.

The food industry is seeing a major transformation: Technological advances and efficient distribution networks are allowing massive changes to the ways that consumers have traditionally purchased food. The Chefs' Warehouse (CHEF 3.60%) has made a point of emphasizing the highest-quality ingredients among its available products, in order to give its high-end customer base a reason to stick with it despite rising competition.

Coming into Wednesday's third-quarter financial report, Chefs' Warehouse investors were expecting to see continued gains in the specialty-foods distributor's key financial metrics. The numbers the company reported were solid, and guidance was encouraging, yet investors still felt like something was missing. Let's look more closely at Chefs' Warehouse to discover what's been happening with the company lately. 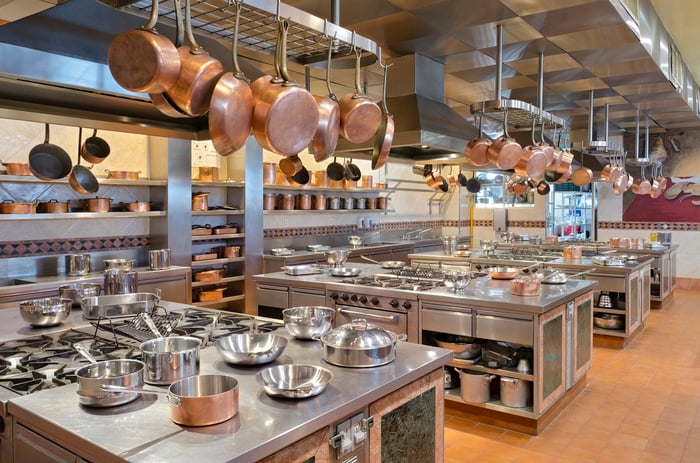 Chefs' Warehouse keeps up its momentum

Third-quarter results for Chefs' Warehouse looked solid and continued to build on past successes. Revenue was up 9% to $325.1 million, slightly outpacing the 8% growth rate that most investors were expecting to see from the company. GAAP (generally accepted accounting principles) net income more than doubled from the year-ago quarter to $2.9 million, and making allowances for extraordinary items, modified earnings of $0.11 per share matched the bottom-line consensus forecast among analysts following the stock.

Organic growth continued to bring in the lion's share of additional business for Chefs' Warehouse. Less than two percentage points of gains came from the recent acquisition of Fells Point Wholesale Meats, leaving Chefs' Warehouse with 7% organic sales gains. Case counts were higher by 3.6% in the specialty division, and unique customers grew more than 4% from the prior year's third quarter. Negative impacts from Hurricanes Harvey and Irma held back sales of protein, which were down 1.2% by weight. Food inflation helped bolster the top line, with increases of more than 5% in both of the company's key segments.

Chefs' Warehouse had mixed success in controlling costs. The food inflation mentioned above contributed to the slightest of declines in gross margin, which dropped by about a tenth of a percentage point to 24.9%. Operating expenses climbed at a slower rate than revenue, however, helping to improve operating margin by almost half a percentage point. Chefs' Warehouse said that better utilization of warehouse facilities and lower labor costs contributed to greater cost control, although higher compensation costs in the company's management infrastructure ate into some of the progress that it made.

CEO Chris Pappas was pleased with how well the company held up despite difficulties. "We continued our positive momentum in the third quarter," Pappas said, "despite a number of challenging headwinds." The CEO said that the company had contributed food, water, and labor in relief efforts to help those affected by Hurricanes Harvey and Irma.

Chefs' Warehouse sees further difficult times ahead. Pappas said that the company is still seeing adverse impacts on its business in the aftermath of the shooting attack in Las Vegas and extensive wildfires throughout northern California. The CEO still believes that most of the company's customer base is in good shape, and will contribute to positive business performance going forward.

In particular, the addition of Fells Point should have a helpful impact on Chefs' Warehouse. The acquisition brings new expertise in specialty and artisanal protein products and manufacturing, and Fells Point should help boost the company's overall presence on the East Coast.

Chefs' Warehouse made modest upward revisions to key guidance for 2017. The company now sees revenue of $1.29 billion to $1.3 billion, up $10 million from its previous projections. Earnings of $0.38 to $0.41 per share pushed to the upper end of its previous guidance.

Even with the solid performance, Chefs' Warehouse investors seemed to focus on the comments about challenges, and the stock fell almost 7% in after-hours trading following the announcement. But despite the declines, Chefs' Warehouse has made an impressive comeback over the past year, and even a pause in share-price gains shouldn't leave investors thinking that the specialty-foods distributor won't be able to keep up its recovery efforts in the coming year.