With shares up around 7% on the heels of the report, let's take a closer look at how the outlet mall real estate investment trust (REIT) kicked off the second half of the year. 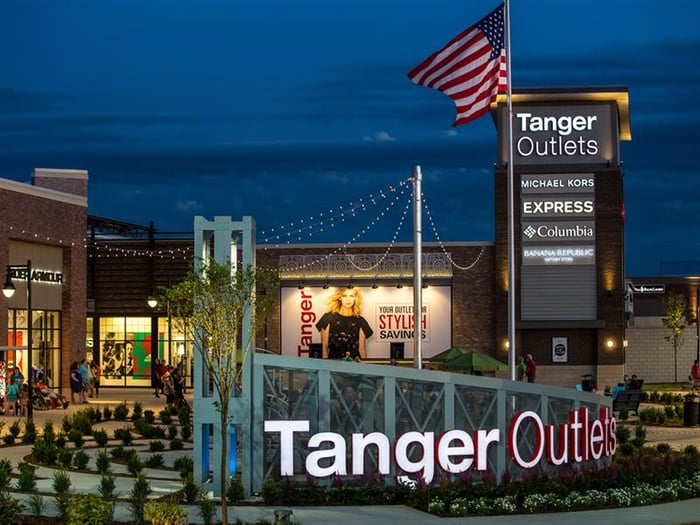 Tanger CEO Steven Tanger noted that the 93% lease rates of those two centers was "an extraordinary achievement in a challenging retail environment." He also stated that recent remerchandising efforts at five centers have improved the overall quality of Tanger's portfolio. But that also meant increasing capital expenditures and second-gen tenant allowances to over $50 million this year. Next year, however, those investments should normalize to roughly $30 million, giving the company added flexibility to allocate free cash flow to boosting its dividend, repurchasing shares, and paying down debt.

Outlets remain an important and profitable channel of distribution for our tenants, as evidenced by our high level of occupancy[...]. For 56 consecutive quarters our same center net operating income has increased, a feat accomplished by very few public REITs. Given the outlet channel's appeal with retailers and our fortress balance sheet, we believe Tanger is well-positioned to weather the current headwinds in the retail environment and emerge stronger when the retail cycle turns positive.

All things considered, this was a busy quarter for Tanger Factory Outlets as the company restructured debt, made progress in several large remerchandising projects, and continued to otherwise effectively manage its core property portfolio. But as the modest update to guidance indicates, this report also contained no big surprises -- and that's a great thing for astute investors willing to continue holding shares as Tanger's long-term story plays out.