Please ensure Javascript is enabled for purposes of website accessibility
Log In Help Join The Motley Fool
Free Article Join Over 1 Million Premium Members And Get More In-Depth Stock Guidance and Research
By Keith Speights - Dec 2, 2017 at 7:21AM

GW Pharmaceuticals stock had a sluggish 2017. But just wait 'til next year.

Admittedly, 2017 so far has kind of been a ho-hum year for former high-flying marijuana stock GW Pharmaceuticals (GWPH). For the most part, investors have just been waiting for the next big event for the cannabinoid-focused biotech. GW Pharmaceuticals CEO Justin Gover doesn't think they'll have to wait much longer.

Speaking at the Piper Jaffray Healthcare Conference on Wednesday, Gover stated that 2018 will be "a breakout year" for GW Pharmaceuticals. And that should just be the beginning. Here are three things Gover said at the conference that you'll definitely want to know about this marijuana stock that could be ready to roar again. 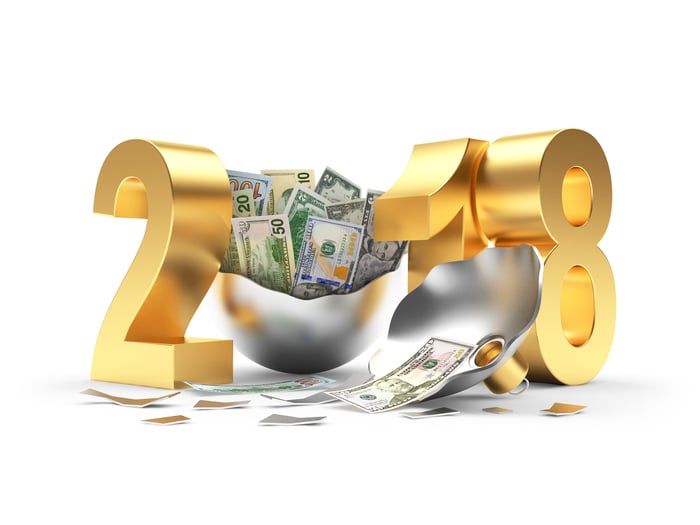 Gover said that he expects next year to be "transformational" for GW Pharma. There's good reason to believe that he'll be right. The company completed its rolling New Drug Application (NDA) submission to the U.S. Food and Drug Administration (FDA) for Epidiolex in October. All signs point to a likely approval for the cannabidiol (CBD) drug in treating Dravet syndrome and Lennox-Gastaut syndrome (LGS), both rare forms of epilepsy, by the third quarter of 2018.

The potential for Epidiolex appears to be significant. There currently are no approved drugs for treating Dravet syndrome. And although a few drugs are approved for treating LGS, Gover pointed out that there "really have been no new treatment options for this patient population for five years now."

Assuming Epidiolex does win FDA approval, GW Pharmaceuticals should be ready to hit the ground running. Gover said that the biotech has established "a high-quality operation in the U.S." and is confident that his team will be able to pull off a successful commercial launch of the drug. When asked if GW Pharma will be able to manufacture Epidiolex in sufficient quantities to meet what could be heavy demand, he responded, "Rest assured, making enough has been taken care of."

2. What investors should know that they don't

The Piper Jaffray analyst asked Gover a great question: "What should investors know that they don't?" His reply was certainly something that will intrigue investors. Gover said that "There is a potential for longer exclusivity than is understood."

Does GW Pharmaceuticals have a card up its sleeve that could extend exclusivity even more? Maybe so. In September, the biotech's executives hinted that drug-drug interactions could help win approval for additional U.S. patents, stating that there was "an increasing level of comfort that the orphan exclusivity period of seven years is a worst-case scenario." These drug-drug interactions, especially with current epilepsy drug Onfi, have been a concern for investors but could ultimately turn out to be a big plus for GW Pharmaceuticals.

One of Gover's first comments at the Piper Jaffray conference was that "There's a bigger story at play" with GW Pharmaceuticals. What he meant was that the company isn't just focused on the Dravet syndrome and LGS indications, nor does its fortunes hinge totally on one drug. Gover mentioned that GW Pharmaceuticals has studied around a dozen cannabinoids "in some depth" and has "a library of data that's covered a lot of neurology."

The company is evaluating Epidiolex in a late-stage study targeting tuberous sclerosis, a genetic disease where benign tumors grow in parts of the body including the skin, brain, and kidneys. The drug is also in the first part of a two-part late-stage study for treatment of infantile spasms. Beyond CBD, GW Pharmaceuticals is researching another type of cannabinoid called cannabidivarin (CBDV) in treating epilepsy and autism spectrum disorders.

Regarding Epidiolex, Gover said that "Our aspirations are to continue to identify where this product can be used." He added that the company could "address other unmet needs through other cannabinoids." Gover closed by saying, "Today, we're valued for Epidiolex, but we have a unique global position in a promising area of science."

A breakout -- but with a couple of caveats

Will 2018 be the breakout year for GW Pharmaceuticals that Justin Gover predicts? I think it will. There's nothing he said at the Piper Jaffray conference about which I have serious reservations.

Having said that, it's only prudent to throw in a couple of caveats. First, there is always the possibility that the FDA might reject Epidiolex. My take is that if this happens, it would probably be related to manufacturing questions rather than the drug itself. Second, even if approved, payers could present more hurdles for reimbursement of Epidiolex than expected. That could cause GW Pharmaceuticals' commercial launch to go more slowly than hoped.

Overall, though, I generally like the prospects for GW Pharmaceuticals over the next few years. This biotech just might be a gold mine for growth investors.