The organic and natural foods specialist jumped last month after a strong quarterly report. Here's what investors need to know.

Shares of The Hain Celestial Group, Inc. (HAIN 0.38%) climbed 14.1% in November, according to data from S&P Global Market Intelligence, after the organic and natural packaged foods specialist returned to growth in its latest quarter.

That's not to say Hain's rise happened all at once. Rather, the stock's gradual climb last month began in earnest after it announced that fiscal first-quarter 2018 revenue had climbed 3.9%, to $708.3 million. That was well above Wall Street's average estimate for $697 million and reversed year-over-year declines of 2% and 1% in the fiscal 2017 third and fourth quarters, respectively. 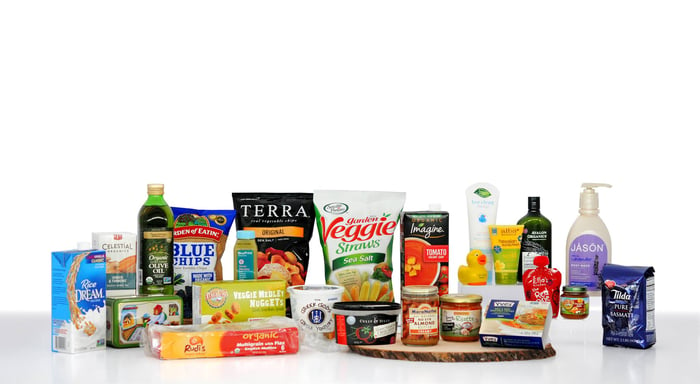 Hain Celestial founder and CEO Irwin Simon called it a "solid" quarter as both sales and profitability improved.

"Importantly, we are on track to build momentum throughout the year as our execution of Project Terra continues to drive incremental sales growth and margin improvement to deliver long-term sustainable stockholder value," Simon added.

For perspective, "Project Terra" is a set of strategic initiatives through which Hain is working to reduce costs while driving both operational efficiency and sales growth.

Earlier this week, Hain also announced it has acquired Clarks, a leading natural sweeteners brand based in the United Kingdom. With the country's leading maple syrup brand, as well as honey and carob, date, and agave syrups, Clarks generated sales of roughly 7 million British pounds (or roughly $9.4 million) in calendar year 2016 -- or less than 1% of Hain's quarterly sales. But the company should be able to expand Clarks' reach, and it serves as a reminder that Hain can find growth through both acquisitive and organic means.

All told, there was little not to like about Hain's quarterly report last month. Combined with the company's steadily growing stable of brands and significant operating leverage boosting the bottom line, it's no surprise to see the stock approaching its 52-week high.