Find out why the spirits giant saw a nice move higher.

The stock market was relatively quiet on Wednesday, as competing factors kept major benchmarks within a fairly tight range close to where they began the day. Ongoing progress on trying to reconcile the two different versions of the tax reform bill kept some investors happy, but a rise in geopolitical risk and ethics-related turmoil in Congress put a damper on sentiment. Nevertheless, some individual companies had positive news, and Brown-Forman (BF.A -6.85%) (BF.B -7.16%), H&R Block (HRB -2.12%), and Madrigal Pharmaceuticals (MDGL -4.31%) were among the best performers on the day. Below, we'll look more closely at these stocks to tell you why they did so well.

Shares of Brown-Forman were up 5%-6% after the maker of Jack Daniel's and other spirits reported its fiscal second-quarter financial results. The company said that revenue for the quarter jumped 10%, helping to send earnings higher by nearly a quarter compared to the previous year's fiscal Q2. Emerging markets were especially strong, benefiting from good organic performance and favorable currency moves, and the company's super-premium and ultra-premium categories showed faster growth than the overall business. With spirits becoming more popular among consumers at the expense of beer and wine, Brown-Forman is in an ideal position to take advantage of favorable industry conditions. 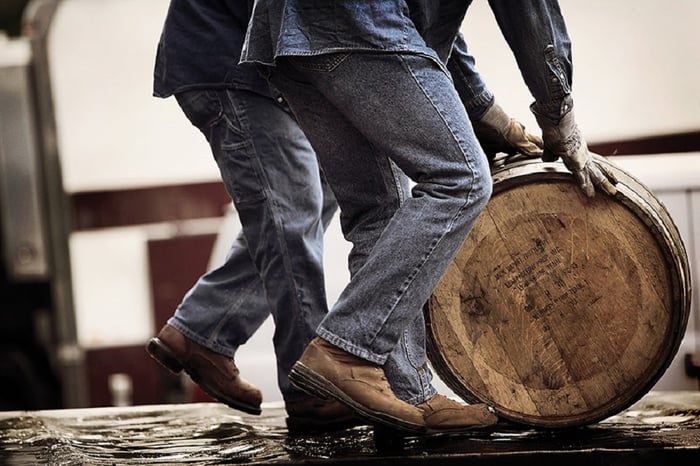 H&R Block stock picked up 10% in the wake of the tax preparation specialist's financial report for its fiscal second quarter. H&R Block saw revenue rise 7% from year-ago levels, but the tax preparer's loss for the quarter widened slightly during the company's off-season. Nevertheless, H&R Block is optimistic about its future, believing that even if tax reform efforts to get through Congress, changes in the tax laws tend to boost its business. Investors have worried about the impact of reform on the tax preparer, but regardless of promises from the federal government for simplified returns, H&R Block is banking on continued complexity keeping customer coming into its doors.

Finally, shares of Madrigal Pharmaceuticals soared almost 90%. The clinical-stage biopharmaceutical company announced that its MGL-3196 experimental treatment for non-alcoholic steatohepatitis showed statistically significant improvements in many key endpoints in a phase 2 clinical trial. Madrigal said that the drug resulted in decreased liver fat compared to the placebo, as well as more favorable low-density lipoprotein cholesterol counts and improved liver enzymes. The big question facing investors is whether Madrigal can compete against rivals that are both financially stronger and further along in development of treatments fighting this disease, but shareholders nevertheless seemed optimistic about the company's prospects.