Value-oriented investors looking for large dividends may want to give Big Blue a closer look.

Has International Business Machines (IBM -2.08%) officially turned the corner? In the recently reported third quarter, the company beat analyst estimates on revenue and earnings per share (excluding certain items). Still, calls that IBM has finally pivoted to the next-generation economy are as old as Watson, the company's artificial-intelligence supercomputer.

One person the company has failed to convince is legendary investor Warren Buffett. Over the past year, Berkshire Hathaway, his company, has dumped nearly 55% of its IBM holdings while saying he has revalued the company downward. 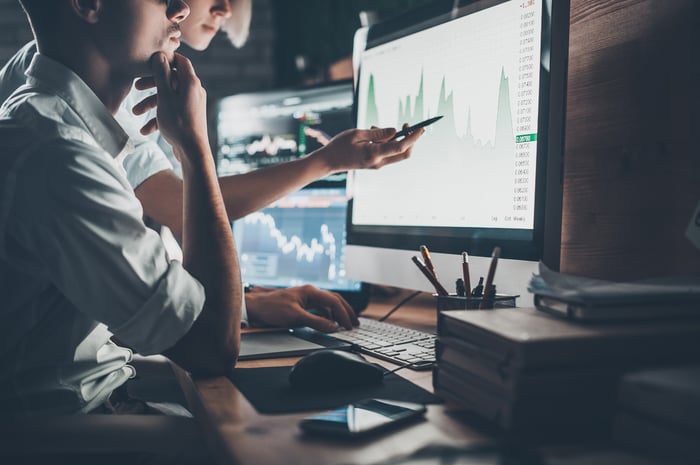 Will IBM ever grow its top line?

IBM is haunted by the fact that it hasn't grown year-on-year revenue in 22 straight quarters, or 5.5 years. There are two reasons for this drought. The first is a strategic shift from CEO Ginni Rometty away from low-margin revenue sources. In 2014, IBM offloaded its x86 server line to Chinese computer hardware company Lenovo and followed that up with selling its microelectronics business to Globalfoundries the following year.

But the second, more worrisome reason is that the company is seeing a decline in its core business because of cloud-computing technologies. Last quarter, IBM's first and third largest biggest segments -- technology services and cloud platforms, and global business services -- had revenue decreases of 3% and 2%, respectively.

Still, there are signs of a nascent turnaround. Rometty has identified high-growth, next-gen technologies like cloud computing, artificial intelligence, and mobile tech as its path forward, calling them "strategic imperatives." Last quarter was close to a milestone in IBM's turnaround, as revenue from these initiatives provided nearly half of all revenue (46%) from the company.

As a comparison, although both technology services and cloud platforms along with the global business services segments produced less revenue than last year, strategic initiatives within each segment increased by 12% and 10%, respectively. Look for IBM to continue to grow its revenue from strategic initiatives, eventually enough to offset losses from its traditional business. Soon, I predict IBM will see its top line increase on a year-on-year basis. And it's also likely the stock will have a short-term relief rally as a result.

IBM may be worth a look for value-oriented investors

For value-oriented investors, there's positivity in negativity. Because Wall Street analysts are bearish on IBM -- there are only six "buy" or "strong buy" ratings out of 27 recommendations from analysts Thomson Reuters polls -- the stock trades at relatively cheap multiples.

IBM currently trades at a price-to-earnings ratio of 13, versus the greater S&P 500's multiple of 25. Forward price to earnings is even cheaper at 11, as analysts expect 2018 full-year earnings to increase to $13.93 per share.

In addition, IBM is willing to pay you for the wait. Currently, shares of the company yield 3.9%, 110 basis  points more than the 30-year U.S. Treasury and double the S&P 500's current 1.9% yield. While I've been critical of IBM's management of cash before, the company's ability to service its dividend is beyond question, with only 49% of its free cash flow (cash from operations minus capital expenditures) being paid out in dividends over the trailing 12-month period. If IBM has finally turned the corner, you may regret looking over the stock at these valuations.