While crude prices are on pace to end the year higher, the journey has been interesting -- to say the least.

Heading into the year, most analysts expected that 2017 would be a tamer one for oil prices because OPEC had finally stepped in to support the market by pledging to limit its production. Because of that, most analysts expected oil to be between $50 and $55 per barrel this year. Crude oil, however, surprised on both ends of the spectrum, plunging back into the low $40s in June before staging a quiet but impressive rally. Overall, the U.S. oil benchmark WTI was up about 8% through mid-December to around $57 a barrel, while the global benchmark Brent soared nearly 20% to more than $63 per barrel.

This volatility had a considerable impact on oil companies this year, with U.S. shale drillers having to readjust quickly when oil prices tanked this summer. That said, after getting burned earlier in the year, they haven't been quite so quick to adjust once oil prices turned higher. By holding back, though, it makes it much more likely that crude prices will hold their ground -- especially after OPEC recently extended its production reduction agreement through the end of next year -- which would be great for producer profitability in 2018. 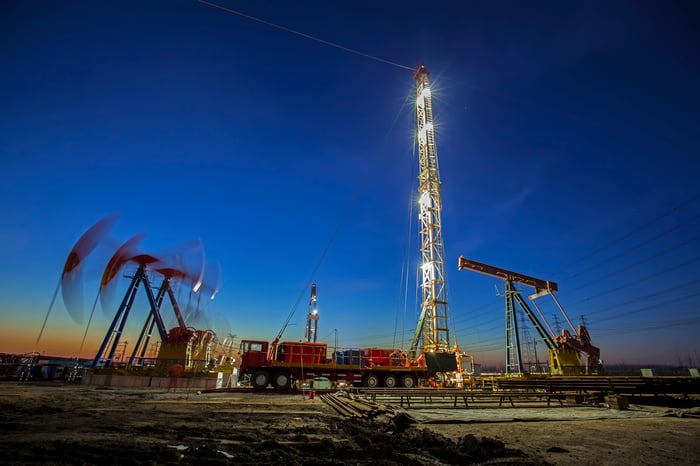 Hitting the accelerator in early 2017

With expectations for oil to be over $50 a barrel this year, shale drillers planned to boost spending significantly in several cases. For example, leading Bakken Shale producer Whiting Petroleum (WLL) initially expected to spend $1.1 billion this year, which was nearly double the $554 million it spent in 2016. That bigger budget would enable the company to boost its daily production rate 23% by year-end, reversing a considerable decline in 2016.

Meanwhile, Sanchez Energy (NYSE: SN) started the year by joining up with a private equity giant to buy Anadarko Petroleum's (APC) Eagle Ford Shale position for $2.3 billion. Because of that, it planned to increase its capital budget to $425 million-$475 million, which was well above 2016's level of slightly less than $350 million.

That said, crude lost its footing as the weather warmed up, with WTI sliding down to a low of around $42.50 a barrel by late June. That forced several shale drillers to tap the brakes on their drilling budgets. Financially weaker companies like Whiting Petroleum were among the first to announce budget cuts, with it slicing $150 million from capital expenditures in July, which would result in a slower production growth rate of 14% for the year. Sanchez Energy also slowed down, stating in July that "given the challenged current oil and gas price environment," it would cut its current drilling fleet from eight rigs to five and reduce its planned spending level for 2018.

Meanwhile, even stronger drillers cut back spending, citing lower oil prices. Pioneer Natural Resources (PXD -3.75%), for example, ran into a drilling issue during the second quarter, which slowed its pace. However, instead of accelerating its activities to catch up, Pioneer Natural Resources chose not to hit the gas "in light of the current commodity price environment." Instead, it cut $100 million from its budget, which would result in production growth coming in at the low end of its 15% to 18% guidance range. 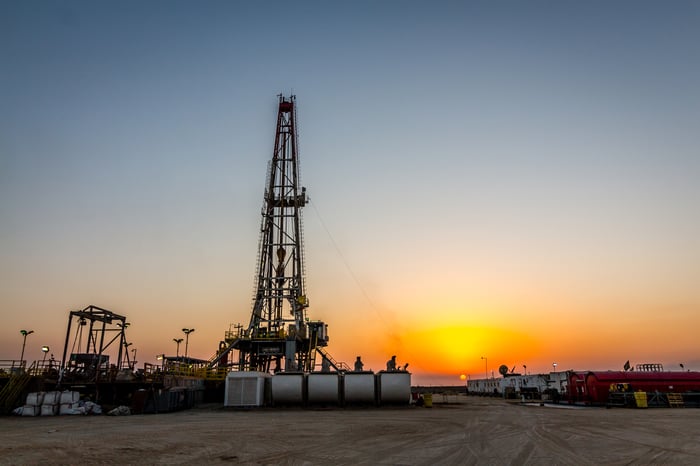 Missing the signs as crude tops $55 or changing direction?

These budget cuts were one of the catalysts that sent oil prices higher in the months that followed because they showed the market that shale drillers weren't going to pump at any cost. That said, what really got crude going was the fact that shale drillers didn't immediately reaccelerate as crude regained its footing above $50 a barrel. For example, Pioneer was one of the few companies that added money back into its budget. That said, the $50 million addition will go toward drilling wells that it will complete at a much later date. Because of that, this incremental spending won't increase production but will instead provide Pioneer with some additional flexibility.

Meanwhile, many others announced plans to begin returning excess cash to shareholders. Anadarko Petroleum, for example, unveiled a $2.5 billion stock buyback, choosing to send some of the money it received from selling assets to investors instead of using it to drill more wells. Anadarko saw that as a "very attractive use of cash" since it could repurchase nearly 10% of its shares outstanding. Meanwhile, the company's recently released 2018 capital budget showed even more restraint, with Anadarko planning to spend between $4.2 billion and $4.6 billion next year, which it can finance with cash flow at $50 oil. That's worth noting because at current oil prices, the plan would generate more than $700 million in free cash. Several others have revealed similar strategies, choosing to repurchase stock instead of plowing all the money back into new wells. Because of that, oil production in the U.S. won't grow as fast as it could next year, which will help prevent a repeat of the past few years where shale drillers unleashed too much oil too quickly, which subsequently pushed prices lower.

2018 could be that year investors have been waiting for

With oil well above $50 a barrel at the moment, producers could unleash a gusher of cash flow next year since most just need $50 oil to run their base business. Because of that, oil stocks could rise sharply in the coming year as producers begin sending this money back to investors. That suggests 2018 could finally be the rebound year oil stock investors have waited so long to see.