The drugstore industry saw big changes in 2017, with Walgreens Boots Alliance (NASDAQ:WBA) finally agreeing to acquire a massive portion of Rite Aid's (NYSE:RAD) store network. Dividend investors might have been nervous about the cost of such a big asset purchase, but the potential growth from expanding its network could dwarf the roughly $4.38 billion price tag that Walgreens will have to pay under its agreement with its rival drugstore chain.

Yet Walgreens has been able to weather changing industry conditions before, and a long history of dividend payments and growth to shareholders emphasizes the commitment that Walgreens has to income investors. Let's take a closer look at Walgreens and whether its dividend remains safe even after its big acquisition.

How Walgreens keeps its yield up

Walgreens has committed itself to dividend investors over the past decade. Until then, the drugstore chain maintained a token payout, but its yield frequently languished below 1%. Since 2008, however, Walgreens' dividend yield has at times been above 3%, with the current level marking a middle-of-the-road yield for the stock.

The reason Walgreens' yield has been so volatile is that its stock price has seen dramatic ups and downs. After making little headway during the early 2010s, the drugstore chain's share price tripled between late 2012 and 2015, cutting its yield in half. Since then, the stock has languished, allowing for a bounce in the yield. Walgreens' dividend yield isn't as high as that of its main rival in the industry, but it is enough to keep most investors satisfied.

Walgreens has funded its increased commitment to shareholders by boosting its overall payout ratio to its current level of around 40%. During much of the past decade, the drugstore retailer paid out only about 20% to 30% of its earnings in the form of dividends. That number started going up in the mid-2010s, when a number of one-time extraordinary items showed up on Walgreens' income statement and resulted in wider swings in its bottom line. The modest payout amount gives Walgreens ample room to make strategic moves, like its asset purchase from Rite Aid, without endangering dividend payments to shareholders.

Walgreens has an outstanding track record of dividend growth. Its streak of rising annual dividends dates back 42 years, qualifying it for inclusion among the prestigious Dividend Aristocrats. 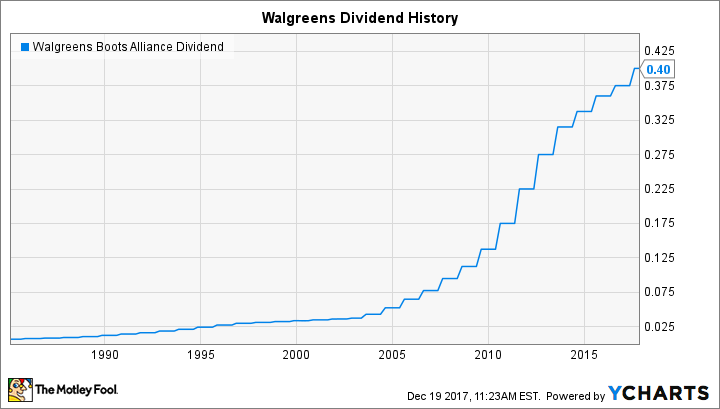 The pace of Walgreens' dividend growth has also been impressive. During the early 2010s, double-digit percentage increases were predictable and reliable, with some boosts in the 20% to 30% range. More recently, growth has slowed, but even the most recent 7% rise in August was strong, especially in light of the financial commitment to pay Rite Aid for its stores.

What's ahead for Walgreens?

Most of the attention that Walgreens has gotten over the past year has centered on the Rite Aid deal, but now that the two drugstore giants have come to a final arrangement, investors have to turn to what's next for Walgreens. Competition is likely to remain fierce, and the proposed combination of rival CVS with health insurance giant Aetna reveals the many pathways toward consolidation in the industry right now. In all likelihood, Walgreens will have to look at more prospective combinations, with an eye toward boosting its vertical integration even as it has maximized the size of its store network.

The bigger challenge could come from the internet. Already, talk of the largest players in e-commerce trying to get in on pharmaceutical distribution has sent tremors through the traditional drugstore retail space. That's one reason why combinations with health insurance providers could build more imposing barriers to entry, but the synergies that could result from consolidation might not be enough to hold internet-based drug retail at bay.

What to expect from Walgreens' dividend

For now, Walgreens has a clear short-term goal: take the stores that it acquired from Rite Aid and integrate them into the existing Walgreens network. In the longer run, though, Walgreens will have to pursue a strategy toward growth if it wants to be able to sustain its impressive record of dividend growth.