McDonald's (NYSE:MCD) is an American icon, pioneering the fast-food industry and becoming one of the most recognized brands in the world. Shareholders in McDonald's have also shared in the company's success, with dependable dividend income and impressive share-price advances over time.

Yet for those who like to see signs of confidence from their investments, the 21st century has been a disappointment for McDonald's. The company hasn't done a stock split in 18 years, even though its stock price is now in a position at which it would previously have made such a move fairly quickly. Let's turn to where McDonald's stands right now and whether 2018 is likely to bring a decision to split the shares of the restaurant chain. 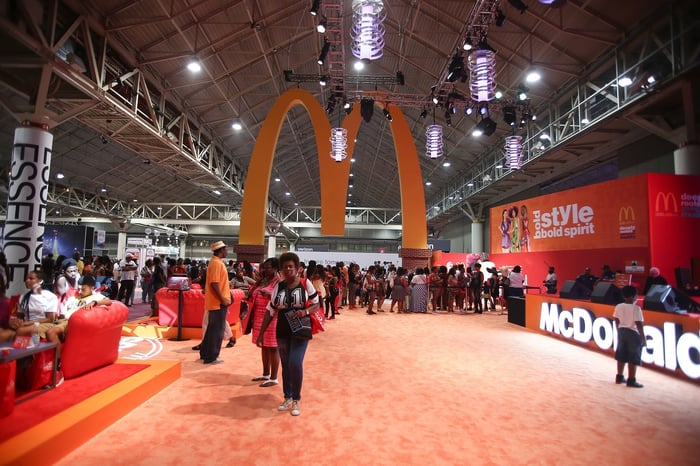 When has McDonald's done stock splits before?

As you can see below, stock splits weren't unusual for McDonald's during the 20th century.

The clusters of McDonald's stock splits mirror the most successful times in the stock market. During the late 1960s and early 1970s, sizable advances for the stocks in the Dow Jones Industrials helped lift McDonald's to new heights. Consistent share-price gains required stock splits at a pace of every one to two years. The bear market of the mid-1970s put a stop to McDonald's split history, and repeated bouts of inflation held down the market until the early 1980s.

From there, another phase of growth brought splits every year or two for McDonald's shareholders. A quick rebound from the 1987 market crash led to further stock splits. During the 1990s, McDonald's favored 2-for-1 splits over its previous predilection for 3-for-2 splits, and that allowed it to make less frequent moves.

The guidelines that McDonald's seemed to use in determining when to do stock splits were fairly common among its peers. Early on, when the stock started to get into the neighborhood of triple-digit levels -- reaching into the $80 to $90 range most often -- the company would do a 3-for-2 split to push the price down into the $50s or $60s. Later on, when 2-for-1 splits were used more frequently, splits could happen anywhere between $60 and $100.

What's remarkable though is that the stock never came close to reaching its current level around $170 without seeing a split hold it down. The gains that McDonald's has posted recently have put the share price into unprecedented territory, and that has frustrated investors who've counted on a stock split to keep the share price down and to communicate the company's confidence in its long-term prospects.

The fact that McDonald's didn't do a split long before now shows how much things have changed in the industry. The need for a double-digit share price to accommodate retail investors has disappeared with the advent of discount brokers. Moreover, although McDonald's has an above-average weighting of just under 5% in the Dow Jones Industrials, five Dow components currently have higher share prices, and a sixth has been trading places with McDonald's on a regular basis. To keep its influence in the Dow, McDonald's might actually feel pressure not to consider a stock split.

McDonald's has said that it looks at the issue periodically, but since an early 2016 investor question on the topic, the company behind the Golden Arches hasn't seemed inclined to take action. Previous comments focused on the logistical and expense ramifications of splits for the company.

Based on current conditions, it's unlikely that McDonald's will do a stock split in 2018. While its share price has kept climbing thanks to favorable strategic moves for the business, the fast-food giant seems content to deliver the healthy dividend and strong share-price increases that resulted in total returns exceeding 40% in 2017.