Bill Gates has spent much of the past decade trying to improve healthcare around the world through the Bill & Melinda Gates Foundation. He spoke about the progress that has been made, as well as the work that remains to be done, during his Jan. 8 speech at the annual J.P. Morgan Healthcare Conference.

Motley Fool analyst Kristine Harjes reported from the conference that Gates' keynote was the most highly attended event thus far. His speech highlighted the importance of bringing healthcare to the world's most disadvantaged peoples and forming partnerships between philanthropy and industry to solve pressing global health issues in both developing and developed nations.

Gates said that driving progress in healthcare had been his full-time job for the past eight years. He acknowledged that there has been notable progress in healthcare around the world, but he also said we're far from achieving global health equity, a state in which "lives everywhere are treated as having equal value." 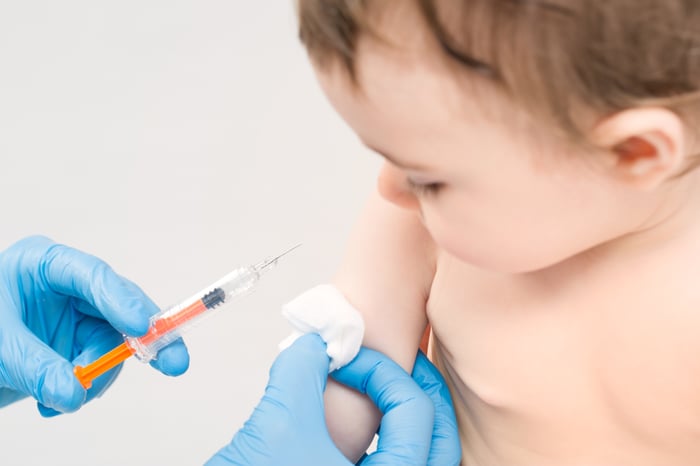 Improving access to vaccines is a focus of the Gates Foundation. Image source: Getty Images.

Things are getting better

Since 1990, child mortality has been cut in half, Gates told the crowd. He credited new vaccines that have been distributed across the developing world, reducing deaths from preventable illnesses such as rotavirus, pneumonia, malaria, and others.

"This is a phenomenal story," Gates said. "In the next 15 years, we want to cut those remaining 5 million deaths in half again."

Gates also noted that progress has been made in the fight against HIV, saying it's "no longer a death sentence." In addition, he pointed out that over half of "neglected diseases" can no longer be called that, because there are now tools available to fight them.

Work remains to be done

"What we need is more innovation," Gates said, noting that his foundation has partnered with academic institutions, drug companies, and others. "If we're even smarter about this, we can accelerate progress in global health."

Gates noted that funding research remains the "very basic element" of improving global healthcare. He explained that while government funding is important, philanthropy plays a major role due to the long timelines some health research involves.

Pre-term birth must be researched

Gates said that it was surprising how little research has been done on pre-term births (which account for half of newborn deaths), even in wealthy countries. He noted that even babies who survive being born early have a greater risk of developing health problems. In addition, he explained that it's now possible to diagnose the possibility for pre-term births, allowing for earlier, more effective intervention, though he added that these tests need to be made more affordable in developing markets.

Go with your gut

Not every issue the Gates Foundation is tackling is rooted in the developing world. The nonprofit, working with a partner, helped to determine that people who grow up eating processed foods in super-hygienic environments have worse gut health, which makes them more susceptible to disease. That's a treatable problem that can be solved through better nutrition.

In general, the foundation has been excited about the research being done on the "gut microbiome."

"There's almost no disease that someone doesn't think they can help with the Microbiome," he said. This research, he explained, could help us someday change the gut conditions in newborns to improve their nutrition absorption. That, he added, might be a more important intervention than anything else that could be done.

What's next for global health?

Gates said that although the last 25 years have been great for global health, he believed that with added resources, the same amount of progress could be made in the next 15 years.

"Achieving health equity in our lifetime, it's not just a possibility," said Gates. "It's almost an imperative, because everyone deserves a chance to live a healthy and productive life."