More specifically, GameStop revealed that for the nine-week holiday period ended Dec. 30, 2017, sales climbed 10.6% year over year to $2.77 billion, including an 11.8% increase in total comparable-store sales. As such, it expects to deliver full-year adjusted earnings per share near the middle of its previously announced guidance for a range of $3.10 to $3.40 -- or roughly $3.25 per share.

By comparison, however, analysts' consensus estimates predicted that GameStop would deliver full-year adjusted earnings above the midpoint of its guidance at roughly $3.32 per share. 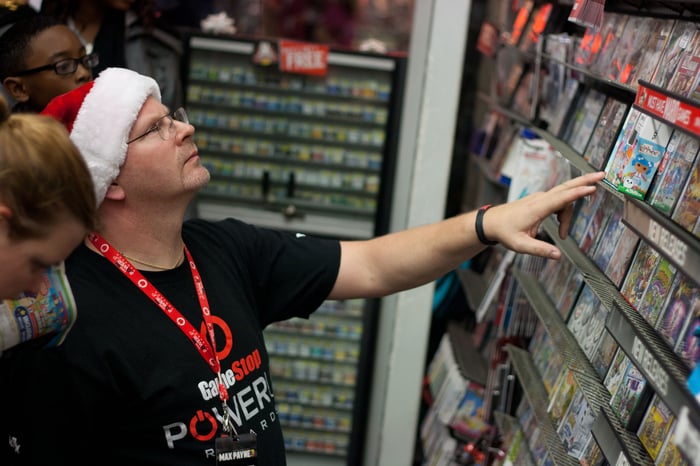 Digging deeper into GameStop's top line, the gaming business segment had a solid quarter, including a 38.3% increase in hardware sales driven by demand for the Nintendo Switch and Microsoft's Xbox One X. New video game software revenue also grew 7.3%, driven by various Switch titles and Call of Duty: WWII. On the nonphysical gaming business side, collectibles sales grew 19.4%.

At the same time, however, GameStop saw pre-owned sales fall 8.1%. And technology brands -- which aren't included in GameStop's comps -- plunged 18.6% due to limited availability of the iPhone X and changes in AT&T's compensation structure over the past year.

GameStop CEO Dan DeMatteo insisted he was "pleased" with the company's sales performance, adding, "Our results demonstrate our customers' enthusiastic response to new products and our ability to execute on strategically targeted promotions."

Looking ahead, in addition to effectively reiterating its full-year earnings guidance as described above, GameStop believes full-year comps should increase by between 4% and 6%. That's roughly in line with guidance provided in November for a gain in the low- to mid-single-digit percent range.

In the end, that's not to say GameStop's holiday results were bad. But given its expected bottom-line shortfall relative to the market's expectations, it's no surprise to see the stock pulling back today.