Retail stocks have been riding high for the past couple months as bullish expectations for strong holiday sales have been confirmed. The SPDR S&P ETF (NYSEMKT:XRT) has jumped 15% over the last two months overcoming a slide for most of 2017, and holiday sales last month were resoundingly positive as the chart below shows.

Kohl's was the star of the group above, but it wasn't the only retailer to see sales surge. At American Eagle Outfitters, comparable sales jumped 8.0%, and Five Below saw comps increase 6.7%. Clearly, it was a bumper holiday season for the industry as predictions of strong growth from Mastercard's ShopperTrak and others proved to be accurate. However, if you read between the lines, you'll see that the stores themselves are still in trouble. 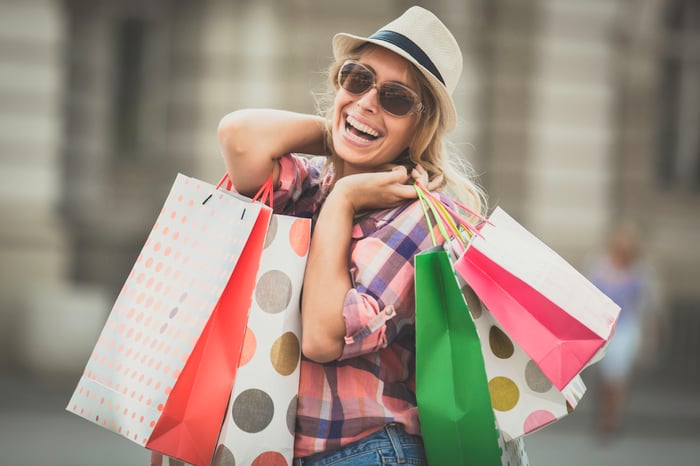 Same-store sales ain't what they used to be

Once upon a time, when retailers reported same-store or comparable sales, the metric referred only to sales from stores themselves, excluding e-commerce. However, as store-based sales have become challenged, retailers have begun to group e-commerce under the heading of comparable sales. Doing so obscures the performance of actual stores as retailers rarely break out the actual same-store sales growth. However, they do leave hints.

Target, for instance, which is on track for its best quarterly comp growth in at least two years, said that digital sales growth is on track to grow 25% or more this quarter and that stores fulfilled 70% of digital sales and therefore enabled 80% of comparable sales growth.  However, the year before, digital sales contributed 1.8% of comp growth, and as the e-commerce base gets bigger, that contribution will increase as well.  As a result, if we estimate a 2.4% increase in digital comps, that means the actual same-store sales growth from stores was closer to just 1%.

Macy's, meanwhile, is on track for its first quarterly comps growth in 12 quarters, but the company's stores seem to still be losing revenue as digital sales grew in the double digits, which likely drove the entirety, if not more, of the comparable sales growth.

J.C. Penney also said the e-commerce sales grew by double digits and that it can now fulfill online orders at all of its stores. Meanwhile, Kohl's, which saw 6.9% comparable sales growth in the period, was the only one of the group to clearly state that in-store sales were positive as was traffic.

While 2018 doesn't seem like it will top the apocalyptic levels of store closings last year, which set a record of at least 6,700 shuttered locations, companies are already announcing new closures. Macy's said it would shut down 11 stores in order to cut down on $300 million in annual expense and streamline non-store functions.

Meanwhile, Sears said it would close 103 stores, following more than 300 closures last year. The once-dominant department store chain seems like it's headed toward bankruptcy as comparable sales fell 16% to 17% over the last two months.

It's worth remembering that Macy's and Sears are leaders in the sector with more than $40 billion between the two of them, which is a lot to give up if they continue to falter.

It's becoming clear that in order for traditional retail chains to survive and even thrive, they must pivot to e-commerce and the omnichannel. WalMart has had considerable success following its acquisition of Jet.com and the rollout of its grocery pickup stations. Target seems to want to replicate that success with its recent acquisition of Shipt, which will help it use its stores as hubs, which is already a key part of its strategy. Even Costco Wholesale has begun embracing e-commerce, partnering with Instacart on some deliveries and making other non-perishable merchandise available with a $75 minimum for free delivery.

In other words, traditional retailers, especially ones that can master this transition, will continue to grow, but stores will still close as e-commerce continues to take market share from brick-and-mortar. Another department store, Nordstrom, already has nearly a quarter of its sales come from the online channel, and that share is growing.

Retail investors need to be mindful of this especially after the recent stock rally. The strongest retailers will be those that can integrate the online channel with stores, increasing the relevance of its brick-and-mortar real estate.