Every now and then, a CEO says something that makes you stop and think. That's what happened for me as Intuitive Surgical (NASDAQ:ISRG) CEO Gary Guthart spoke at the annual J.P. Morgan Healthcare Conference on Thursday. I was already familiar with most of what Guthart said in his presentation. But then he stated something that really jumped out: He referred to Intuitive Surgical as an Internet-of-Things (IoT) company.

That comment really stood out to me, because I haven't thought of Intuitive Surgical as an IoT play. But it is. The company's da Vinci robotic surgical systems are connected to the internet, meeting the very definition of IoT. I'm not alone in overlooking Intuitive Surgical as an IoT stock, though. For example, a recent ranking of the best IoT stocks of 2017 left Intuitive off the list -- but its stock beat the performance of the top stock on the list by nearly 30% last year.

The reality is that Intuitive Surgical is probably the hottest IoT stock on the market right now. And it's also probably the most overlooked, at least as an IoT stock. The good news is that things should get even better for the company in the future. Just check out some of the highlights of what Guthart said at the J.P. Morgan conference. 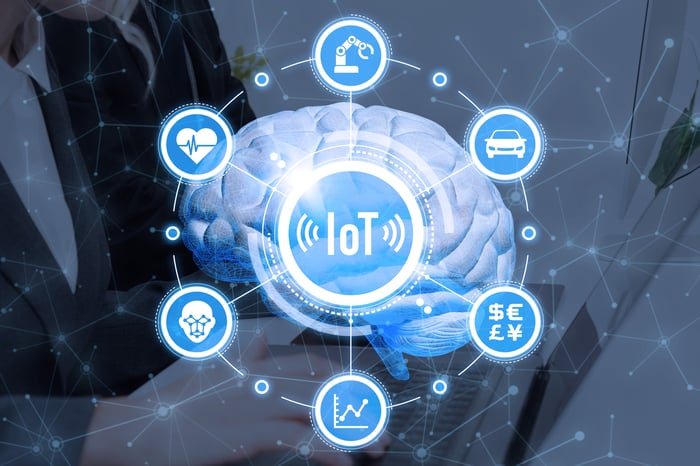 Surgery has significant room for improvement

That's how Guthart described the approach most patients have to take today in finding the best surgeon to use. He noted that variability in surgery remains a huge problem despite progress. For example, Guthart cited a 2013 New England Journal of Medicine study that found the bottom quartile of surgeons had three times more complications than the top quartile.

Variability isn't the only problem. Guthart showed statistics revealing that nearly 36% of rectal surgeries and 17% of complex ventral hernia surgeries in the U.S. have complications.

For Intuitive Surgical, though, these problems represent opportunities. Its da Vinci systems are designed to help reduce the variability among surgeons. Da Vinci's IoT creds come into play on this front also. Guthart said that thanks to the systems' connection to the Internet, Intuitive has a database chock-full of data with which the company uses data analytics to share information with customers to help them improve outcomes.

The da Vinci systems allow surgeons to see digital images of the surgical area on patients and manipulate robotic surgical instruments from a console a few feet away. As cool as the technology already is, Guthart discussed several ways that Intuitive Surgical continues to innovate.

One of those ways is the da Vinci X system, which Intuitive Surgical launched in 2017. This system costs less than the company's previous systems. Guthart acknowledged that there had been some concerns that rolling out a lower-priced system could take market share away from Intuitive's other da Vinci systems. However, he said that so far da Vinci X had "catalyzed additional demand," instead of cannibalizing sales from its higher-priced models. 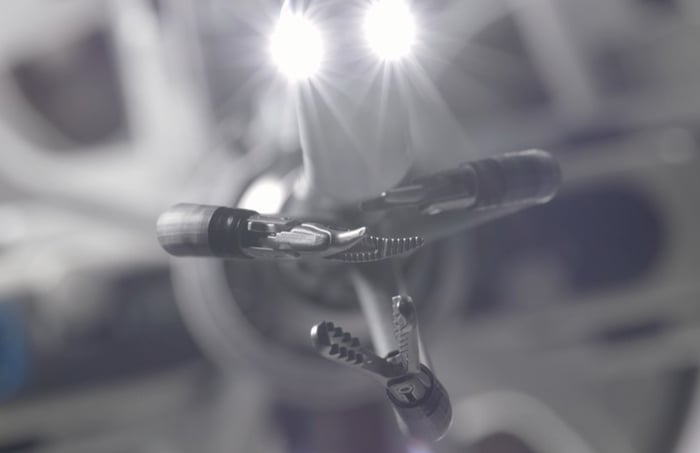 Guthart also discussed a new development that hasn't been cleared for sale yet. This latest innovation from Intuitive Surgical allows a less invasive approach with tiny surgical instruments that can be used for intraoral surgery. He said the opportunities for these less invasive approaches is "huge" for the company.

Razor-and-blades model works great even in the 21st century

I have said before that Intuitive Surgical has a new twist on the old "razor-and-blades" business model. Over 70% of the company's revenue comes from recurring sources, including instruments, accessories, and services.

The great thing for Intuitive is that there is a built-in incentive for customers to get the most out of their initial investment in buying a da Vinci system. That means the customers perform more robot-assisted surgeries. And this translates to greater sales of instruments and accessories. Take a look at the slide Guthart shared: 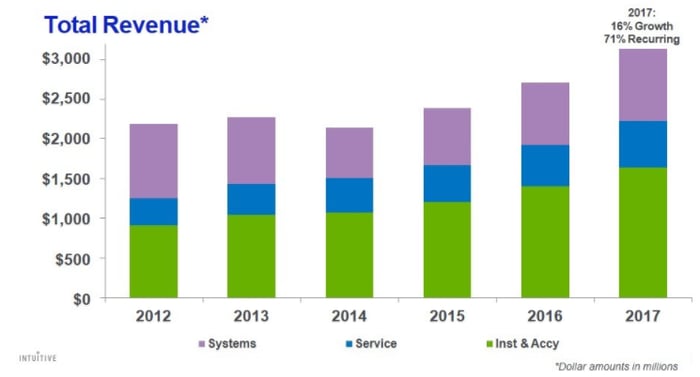 The most impressive thing, in my view, is that revenue from recurring sources -- service, instruments, and accessories -- continues to steadily grow. In fact, Intuitive Surgical's recurring revenue for 2017 is nearly at the level of the company's total revenue in 2012.

A world of opportunities

Guthart acknowledged that 2017 wasn't a "flawless year" for the company. In particular, he mentioned challenges with utilization in some countries, particularly France, and with system quotas in China. However, as was the case with the need for improvement in surgery, I think those problems represent opportunities for Intuitive Surgical.

Around two-thirds of da Vinci systems are installed in the United States. But there are many more people -- and surgeries -- outside the United States. International expansion presents a tremendous growth opportunity for Intuitive. Guthart knows this as well as anyone else and listed developing core European markets and Asian market access as one of the company's top priorities for 2018.

Intuitive Surgical does face other potential threats. Medtronic (NYSE:MDT) plans to launch a rival to da Vinci later this year. The company is much bigger than Intuitive and has deep ties to healthcare customers around the world.

And there are smaller potential rivals on the horizon as well. TransEnterix (NYSEMKT:ASXC) won FDA clearance for its Senhance robotic surgical system in October. Although TransEnterix has tried to downplay the prospects of going head-to-head against Intuitive, I suspect it's only a matter of time before that's exactly what happens.

Still, the story for Intuitive Surgical continues to be a great one overall. Increasing acceptance of robotic-assisted surgery, along with the company's innovation, business model, and expansion opportunities, should give Intuitive a nice growth runway for years to come, in my view. I'd definitely categorize Intuitive Surgical as one of the hottest IoT stocks around, today and for the future.