Please ensure Javascript is enabled for purposes of website accessibility
Free Article Join Over 1 Million Premium Members And Get More In-Depth Stock Guidance and Research
By Brian Stoffel - Jan 15, 2018 at 11:30AM

If my crystal ball is right, it won't exist. But here's why shareholders shouldn't panic.

Latin American economies are often forgotten in our debate about where global growth will come from in the decades ahead. For the longest time, the focus was on the BRIC countries of Brazil, Russia, India, and China. While the first obviously qualifies as representative of Latin America, the region includes 18 other countries and roughly 430 million people residing outside of Brazil. 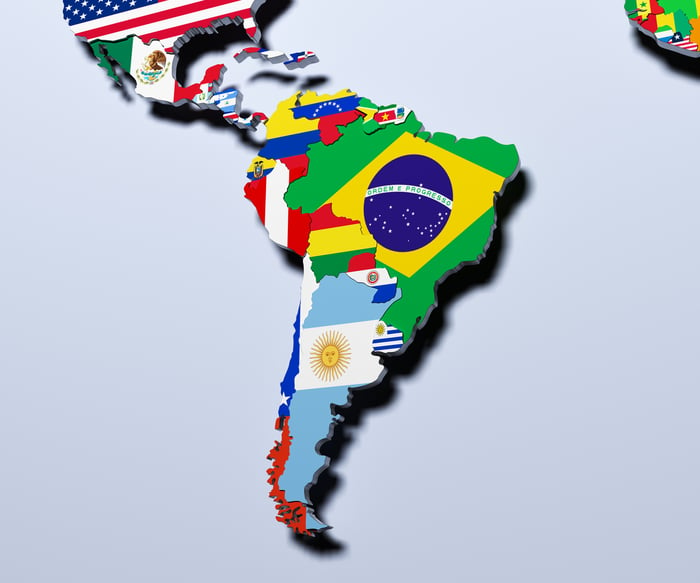 But the tendency to overlook Latin America has actually worked to the benefit of several companies, chief among them MercadoLibre ( MELI -6.75% ). The company started out with an auction platform similar to eBay, but has since moved on to include payment options (MercadoPago) akin to PayPal, as well as shipping and fulfillment (MercadoEnvios).

The results have been enormously positive for investors, with shares gaining 1,100% since going public in 2007.

Mercadolibre's stock has whipsawed over the past three years for two big reasons: political and currency concerns, and the encroachment of Amazon. Amazon has already been set up in Mexico for years, and recent reports indicated that it could be moving into Brazil, MercadoLibre's most important market.

But MercadoLibre's results have made it clear it has a significant upper hand on Amazon when it comes to Latin America. The company had 201 million registered users as of last quarter, equivalent to almost one third of Latin America's population; total payment volume increased 74% to $3.7 billion in the third quarter alone; and gross merchandise volume -- or the total value of all the "stuff" sold -- jumped 50% to $3.1 billion.

More importantly, however, the company's investments in its delivery network -- and deals on free two-day shipping in some locations -- have caused growth rates to either maintain or re-accelerate from their torrid pace across the company's geographical footprint. 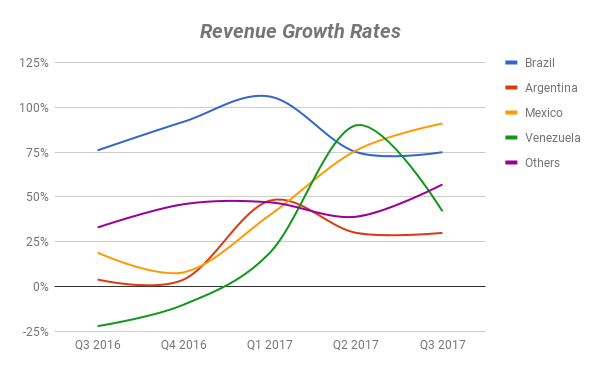 Yes, Amazon could enter into a protracted and ugly war against MercadoLibre, but it would result in a lot of waste on both sides. Working together makes so much more sense.

Imagine trying to explain to your 1997 self how a small company selling books online could somehow morph into the largest e-commerce giant in North America, leaving behind a swath of brick-and-mortar wreckage -- an economic version of Sherman's march to the sea.

But if we simply look at Amazon's mission statement since day one, it all makes sense:

"To be the earth's most customer-centric company."

There's a little more to it than that, but this is the core of what needs to be understood. For the purposes of this article, we're going to focus on the word "earth." Jeff Bezos has shown no signs of backing down from this mission over the past 20 years, and to assume he will anytime soon would be a grave error. Offering the best customer-service experience in Latin America is definitely on his "To Do" list.

He can accomplish that a lot quicker by simply acquiring MercadoLibre. The latter already has significant mindshare in the region; the relationships developed with local convenience stores to help the "unbanked" use MercadoPago is the type of "local" relationship that would take years to match; and the fulfillment infrastructure has already started to take shape for MercadoLibre.

While it would have been much cheaper for Amazon to have made such a move as recently as February 2016 when MercadoLibre had a market cap of less than $4 billion, Amazon could still save money and gain exposure to Latin America by simply joining forces.

Currently trading with a market capitalization of $15 billion, MercadoLibre is by no means cheap. Amazon already took on a lot of debt when it acquired Whole Foods last year, and doesn't have much of a net cash position to speak of any longer.

That being said, an acquisition of MercadoLibre could be paid for in an all-stock deal. At today's prices, that would mean issuing roughly 12 million new shares of Amazon, diluting current shareholders by roughly 2.5%. That's not ideal, but it seems to be the best possible way for Amazon to swing such a deal.

There are three scenarios that I can see playing out. In the first -- outlined above -- Amazon acquires MercadoLibre. In the second, MercadoLibre's head start and home court advantage are enough to allow it to "win" Latin America and continue its dominance in the region. Both scenarios are positive for MercadoLibre shareholders, and represent a silver lining should an acquisition not take place.

Having said that, there's a third scenario that's downright ugly: MercadoLibre and Amazon going to war with one another, slashing prices on goods and services while investing heavily in infrastructure. The idea would be to bleed out the competition, with results being largely negative for both players. As someone whose owns shares of both Amazon and MercadoLibre -- accounting for 27% of my real-life holdings -- I truly hope this third scenario doesn't come to pass.

If it does, MercadoLibre could be a shell of its current self in five years. But I'm counting on cooler heads prevailing -- and my skin in firmly in the game supporting that belief.