A capital-light business plan, healthy metrics, and rooms in reserve

Marriott owns 30 hotel and timeshare brands that extend across 126 countries. The company's business model emphasizes the licensing of its brands and hotel management over property ownership. As of Sept. 30, the end of Marriott's most recent reported business quarter, the organization owned or leased just 68 out of 6,401 properties worldwide.

Thus, during the first three quarters of 2017, 64% of the company's top line (excluding reimbursed costs), or $2.5 billion, was generated from management and licensing fees. This is a "capital light" model that helps sustain the organization during cyclical downturns, while also providing for extremely rich cash flow.

In fact, during the three reported quarters in 2017, Marriott generated $1.9 billion in operating cash. Combining this with monies raised from property dispositions and cash on hand, the company repurchased $2.1 billion of its own shares, while issuing $362 million in dividends to shareholders. Marriott's dividend currently yields roughly 1%, but a 34% payout ratio signals room for expansion on this front. 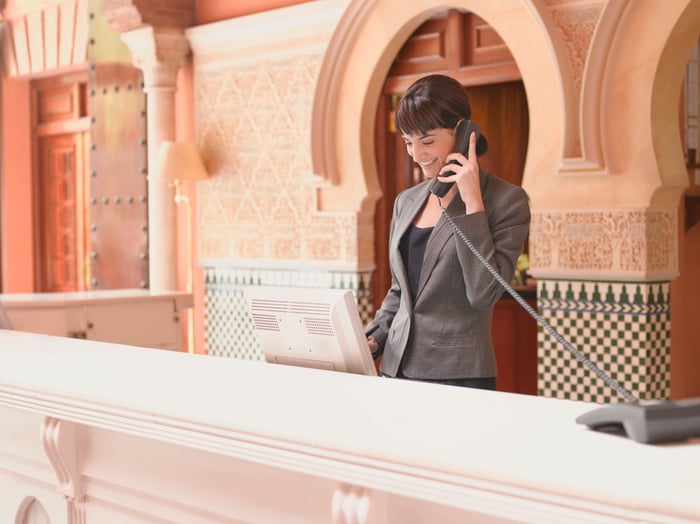 Despite its size -- the company has 1.2 million rooms under its various brands -- Marriott has demonstrated growth in key hotel industry metrics following the Starwood merger. In the first nine months of 2017, the company's global systemwide RevPAR, or revenue per available room, grew 2.6% to $115.99. In the third quarter, management revised its full-year RevPAR growth target to 2%-3%, from an earlier range of 1%-3%.

Revenue per room is benefiting from vibrant consumer demand for both Marriott's luxury brands, which include names like JW Marriott, Ritz-Carlton, and Starwood Hotels, and its full-service flags such as Courtyard and Residence Inn. Like its competitors, Marriott is also reaping rewards from a moderately expanding global economy. In the company's most recent earnings conference call, CEO Arne Sorenson cited a pickup in the Chinese economy, as well as demand in India and Europe, as factors behind Marriott's recent global RevPAR improvement.

Perhaps Marriott's most attractive feature as an investment is its room development backlog. Marriott now claims over 450,000 rooms in its worldwide development pipeline. In other words, the company has approved future rooms equal to 18% of its current base, and the vast majority of these rooms will be licensed and/or managed under its plethora of brands -- not owned. This asset, which you won't find on the balance sheet, provides insulation against the potential economic downturns that can crimp hotel industry growth. Subject to hotel construction and conversions of competitors' brands, the development pipeline represents fee expansion for Marriott in the years to come.

Is it too late to take a position in Marriott stock?

Having discussed some of Marriott's advantages, it's prudent to note that investor enthusiasm has caused the venerable hotel franchise's valuation to swell. Since the beginning of 2017, Marriott's forward price-to-earnings (P/E) ratio has increased by roughly one-third, from 20 to 27. Favorably for shareholders, strong earnings have kept the company's P/E ratio from advancing as quickly as its share price.

In comparison with its competitors, Marriott's market price is well within reason, trading near the low end of P/E readings within a small group of leading names in the hotel industry: 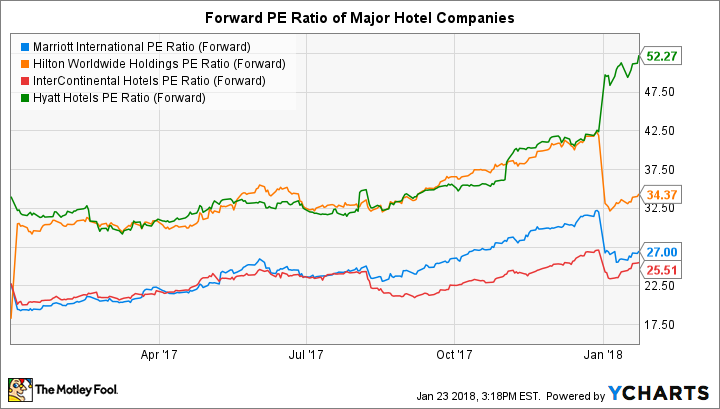 Note that while each of these hotel properties trades at a higher multiple than the market, as determined by the S&P 500 Index's average forward P/E of 18.5, they should also be compared to the "consumer discretionary" sector of the S&P 500. This sector typically commands a higher premium than the overall market during periods of healthy economic growth, and at present, consumer discretionary stocks in the S&P 500 trade at a forward P/E ratio of 21.5.

Thus, when you consider Marriott's superlative brands, healthy operating metrics, rich cash flow, and enormous room development pipeline, the organization is well worth a few points of premium relative to its consumer discretionary sector peers. Better yet, Marriott appears to be fairly priced against its longtime competitor group. Despite last year's surge, it's certainly not too late to add this dominant hotelier to a diversified, long-term, growth-oriented portfolio.