Investors seemed to brush aside any remaining concerns related to the security vulnerabilities reported in early January.

When Intel Corporation (INTC -0.86%) reported on its fourth-quarter and full-year 2017 financial results, investors hoped for the best but feared for the worst. Hanging over the proceedings were concerns regarding the impact from the security flaws dubbed Meltdown and Spectre that rocked the tech world when they were reported earlier this year. These far-reaching vulnerabilities affected nearly every chip Intel has produced since the mid-1990s, and investors feared they would derail the impressive gains the company made in 2017.

Investors, then, appeared to breathe a sigh of relief when Intel CEO Brian Krzanich said during the earnings conference call that "[w]e don't expect any material impact of this security exploit." 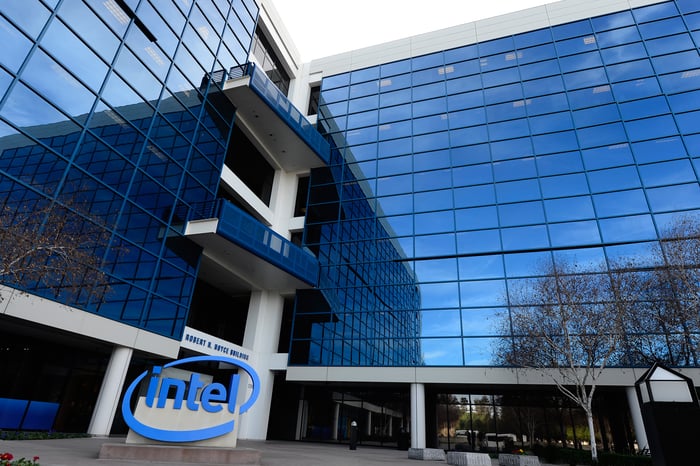 Intel reported record fourth-quarter revenue that grew to $17.1 billion, up 4% over the prior-year quarter. That performance beat analysts' consensus estimates of $16.35 billion and Intel's own forecast of $16.3 billion. Early last year, Intel spun off security software company McAfee, which skewed the comparisons. Excluding McAfee's contribution from the prior-year quarter resulted in revenue that grew an even more impressive 8% year over year.

Intel also reported a one-time repatriation tax expense of $5.4 billion. Excluding all the one-time items, earnings per share of $1.08 surpassed consensus estimates of $0.86 per share and Intel's own forecast of $0.80 per share.

Revenue from the company's PC-centric client computing group, meanwhile, fell to $9 billion, for a less-than-expected 2% year-over-year decline, while growth in several key areas contributed to the impressive quarter.

Several other segments produced impressive gains, though they represent a much smaller percentage of the business. The Internet of Things group grew to $879 million, up 21% year over year, while the non-volatile memory solutions group jumped 9% to $889 million.

Intel's focus wasn't solely on revenue. The company decreased its total spending as a percentage of revenue to 30%, down from 33.2% year over year. Intel had previously announced its intention to achieve this benchmark by 2019.

Intel revealed that it would share the bounty of the recently passed U.S. tax legislation with investors, and would increase its dividend by 10% to $1.20 annually, while the board declared a quarterly dividend of $0.30 per share, payable on March 1 to shareholders of record on Feb. 7.

Despite Krzanich's assurances, Intel did acknowledge that there is still the potential for fallout related to the Spectre and Meltdown vulnerabilities:

We have [faced] and may continue to face product claims, litigation, and adverse publicity and customer relations from security vulnerabilities and/or mitigation techniques, including as a result of side-channel exploits such as "Spectre" and "Meltdown," which could adversely impact our results of operations, customer relationships, and reputation.

For the first quarter of 2018, Intel is expecting revenue of $15 billion, plus or minus $500 million, and earnings of $0.65 per share, plus or minus $0.05. This showing would represent an estimated 5% gain year over year at the midpoint of the range when excluding McAfee's contribution to the prior-year quarter. The company is also expecting an operating margin of 25%, a 67-basis-point year-over-year increase.

The combination of better-than-expected results, a record year, and stronger-than-expected forward guidance seemed to assuage any concerns investors had regarding Intel's handling of the security vulnerabilities. But it's still too early to tell whether this Spectre will come back to haunt them.