After generating $160 million in free cash flow in 2017, the bond-trading network is set to deliver more cash into the hands of its shareholders in the year ahead.

Notably, MarketAxess' share of the U.S. high-grade and high-yield electronic market rose to an estimated 86% in 2017, up from 80% the prior year, according to a study by Greenwich Associates.

MarketAxess' revenue increased 5.4% to $99.6 million, driven by a 2.9% rise in commission revenue, to $88 million, and a 30% climb in all other revenue (information services, post-trade services, and investment), to $11.6 million.

Operating expenses increased 13.8% to $50.2 million, mostly because of higher employee compensation and technology costs. In turn, pre-tax income declined 1.9% to $49.4 million, as pre-tax margin fell to 49.6% from 53.3% in the year-ago quarter.

For the full year, MarketAxess produced $160 million in free cash flow, up from $145 million in 2016. Management remains committed to passing a sizable portion of this cash on to shareholders; the company boosted its quarterly dividend by 27%, to $0.42. 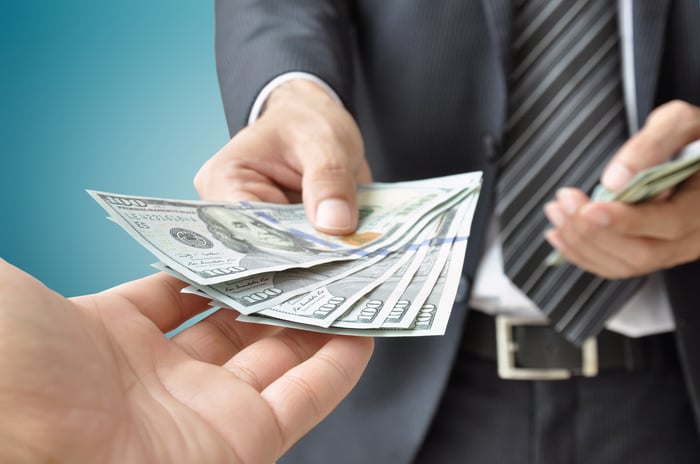 MarketAxess will be paying out more cash to investors in the year ahead. Image source: Getty Images.

Management expects 2018 full-year expenses in the range of $220 million to $232 million and capital expenditures of $43 million to $50 million.

MarketAxess also anticipates that its effective tax rate will fall to between 23% and 25%, down from 26.6% in 2017, mainly because of the impact of the Tax Act.

"As we enter 2018, we are encouraged to see signs of more normal fixed-income trading conditions, including improving global economic growth and declining central bank quantitative easing," the company said in a press release. "Client adoption of electronic trading in fixed income continues to grow, and our international client diversification creates a valuable foundation for long-term growth."