Please ensure Javascript is enabled for purposes of website accessibility
Log In Help Join The Motley Fool
Free Article Join Over 1 Million Premium Members And Get More In-Depth Stock Guidance and Research
By Rich Duprey - Feb 5, 2018 at 8:19AM

Plans for a new hotel on recently acquired property have been thrown into doubt.

Wynn Resorts' (WYNN 2.11%) entire business plan has been thrown into a massive swirl of uncertainty because of the recent allegations of sexual misconduct lodged against CEO Steve Wynn. Although the casino mogul has denied the allegations, there's no clear path forward for the business or investors right now, and the big bet the casino operator was about to place on Las Vegas may now be in doubt as well.

In December, Wynn Resorts bought a massive parcel of land across the street from its existing Encore and Wynn Las Vegas properties. The 34-acre property had once held the iconic New Frontier casino and hotel that had the distinction of being the second casino to open in Las Vegas in 1942. It had since fallen on hard times and was torn down, and the land changed ownership several times.

Wynn picked up the acreage -- and an additional four acres alongside -- for only $336 million with no indication of what was planned, other than that it was earmarked for "future development." It was speculated that the price was so cheap it couldn't be passed up, and the property would be mothballed until it could be seen whether other projects by Wynn and other resort operators that were under way would pan out. 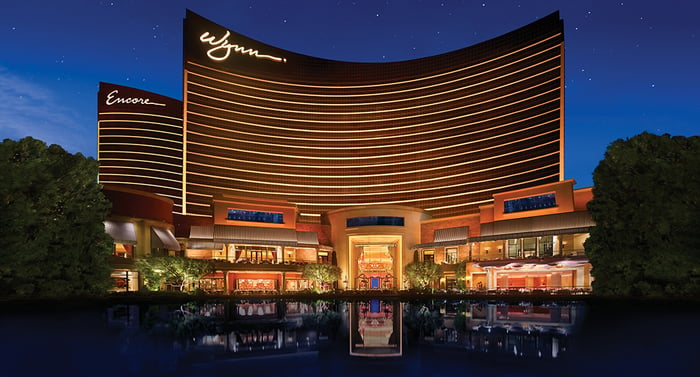 But Steve Wynn apparently had other ideas. He was willing to make a big bet that Las Vegas was on a comeback and that the Oct. 1 tragedy at the Route 91 Harvest Music Festival, at which nearly 60 people were killed by a gunman, would cause only a short-lived downturn.

In a conference call with analysts to discuss the resort's fourth-quarter and full-year 2017 earnings resorts, Wynn said he was going to be building a fourth hotel on the site.

Build it and they will come

There's a good reason behind the plan. "[H]otels are extremely profitable," Wynn said on the call, and he said it was among the best divisions the casino operator had because "we operate at 50% to 60% margins." Every additional dollar of hotel revenue Wynn receives is pure profit.

Until the tragedy, Las Vegas had been undergoing a renaissance. Although visitor volumes had been soft through the summer, rotation of shows out of Vegas had volumes slowing -- and then the events of October caused them to tumble. They ended up staying depressed for the rest of the year.

Before that, the casino operators had been counting on a revival. Wynn was developing the $1.6 billion Paradise Park behind his existing resort, which will feature a 20-acre lagoon and a white-sand beachfront, as well as a 47-story, 1,500-room hotel. MGM Resorts (MGM 3.63%) was turning its attention to Vegas after having spent $7 billion around the world developing new casinos. It would now be focusing its capital expenditures closer to home, starting with the upgrade of the Monte Carlo, which would be transformed into the Park MGM.

Additional development from Resorts World and The Fountainbleu are scheduled to occur in the years to come.

That's why it seemed Wynn Resorts would hold off for the moment with its new piece of property, but the resort operator believed he could profit handsomely by getting another hotel built there. Coming in with a luxury room in the middle of 6 million square feet of convention space -- half a million of which was Wynn's own high-quality space -- Wynn said he was going to get the buildings up "as fast as I can."

Visitor volume may be slow now, but Wynn was looking out 15 to 20 years down the road. With 43 million people coming even in a downturn, in a decade or two, millions more would be coming to Las Vegas, which Wynn said meant "you can absolutely be fearless" in your plans.

Unfortunately, all that has been rocked to the core. While Wynn Resorts isn't going to stop operating because of the allegations, my colleague Travis Hoium notes that the resort operator is closely linked to the vision Steve Wynn holds, and his efforts have been a key factor in the company's success over the years.

Obviously, there's still considerable uncertainty about the future for Wynn Resorts. But a company that was about to commit billions to a major redevelopment project may be reluctant about moving forward until it can be determined what the impact will be. This grand vision for Las Vegas may indeed be put on the back burner for the time being.