A revenue slump and a big guidance miss wiped out nearly one-third of the company's value.

Shares of semiconductor supplier MACOM Technology Solutions Holdings (MTSI -1.79%) tumbled on Wednesday after the company reported disappointing fiscal first-quarter results. It missed analysts' estimates on all fronts, and it provided guidance that fell well short of expectations. The stock was down about 32% as of 12:30 p.m. EST.

For the period, which ended Dec. 29, MACOM reported revenue of $130.9 million, down 13.7% year over year and roughly $2 million below analyst's average estimate.  CEO John Croteau blamed a geopolitical downturn in China for the lackluster results. 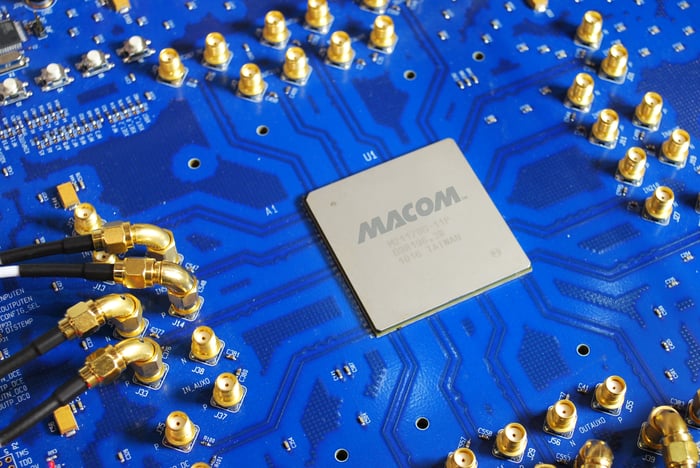 Non-GAAP earnings per share came in at $0.10, down from $0.57 per share in the prior-year period and $0.03 per share lower than analysts had expected. Lower revenue and higher costs combined to drive down the bottom line.

In addition to coming up short of analysts' estimates, the guidance that MACOM provided also missed the mark. The company says it expects its Q2 revenue to land between $142 million and $150 million, down from $186 million in the prior-year period,  a range that mostly falls below the analysts' consensus expectation of $148.75 million.

Croteau believes that December marked the bottom of its demand trough:

In the December quarter, we believe we saw the low-point in terms of market demand and revenue. Entering the March quarter, we expect our fiscal second quarter will represent the bottom for adjusted gross margin as we anticipate a progressive recovery in product mix and growth in the higher margin parts of our portfolio over the course of 2018. Longer term, we are still committed to our target of delivering 60 percent adjusted gross margin.

Shares of MACOM are now down about 69% since peaking in mid-2017, with Wednesday's slump adding to losses suffered in November following a weak fourth-quarter report. With revenue and earnings moving in the wrong direction, there was nothing to like about the company's Q1 report.