The global infrastructure owner is building a big war chest to capture opportunities in 2018.

Brookfield Infrastructure Partners (BIP 1.54%) invested more than $2.7 billion last year to expand its platform of infrastructure businesses. Those new additions paid meaningful dividends by helping boost cash flow by double digits, which fueled market-crushing returns for investors. Those growth initiatives also enabled the company to increase its high-yielding payout by 8% for 2018, which was toward the high end of its 5% to 9% target range. 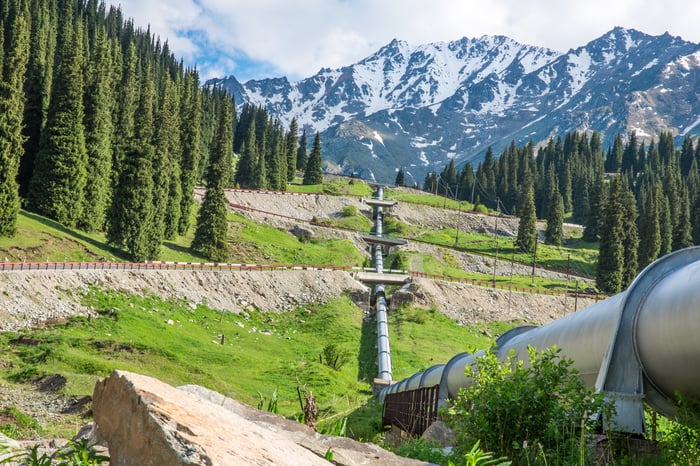 A combination of acquisitions and organic expansions drove the quarter.

2017 was a strong year for Brookfield Infrastructure, completing a successful decade for the business. We posted solid financial results, acquired a large marquee utility, invested almost $1 billion across our various networks and strengthened our balance sheet. Upon completion of the sale of our Chilean electricity transmission operation, corporate liquidity is expected to be approximately $3 billion. We are well positioned to fund our organic growth project backlog and execute on several interesting new investment opportunities that we are currently pursuing.

Brookfield Infrastructure was busy last year. It closed the sale of a stake in Petrobras' natural gas pipeline business, which helped lead the way in driving FFO up 14% per unit. Brookfield got a great price on that business because Petrobras needed to sell assets to pare debt due to lower oil prices. To put the deal into perspective, Petrobras is currently trying to sell a smaller pipeline system in the northern part of the country for between $5 billion to $7 billion, while Brookfield and its partners only paid $5.2 billion for the larger southern system.

Meanwhile, that deal would have moved the needle on FFO per unit even more if the company didn't issue $1 billion equity during the year to sustain liquidity so it could capture new opportunities. However, with that cash, as well as what's coming from an upcoming asset sale, it has $3 billion at its disposal to fuel future growth.

Brookfield is already starting to put some of that cash to work. At the end of December, the company spent $30 million to acquire an 11% stake in the second largest natural gas distribution system in Colombia. It's working to buy more of that business in phases and could invest up to $170 million into it this year. In the meantime, after funding $900 million of organic growth projects last year, the company has another $1.3 billion in the backlog that it expects to finish over the next three years. Included in that is a $30 million investment it recently secured with Kinder Morgan to expand their pipeline joint venture, with the partners noting that they are working to secure up to $300 million of additional projects.