Please ensure Javascript is enabled for purposes of website accessibility
Log In Help Join The Motley Fool
Free Article Join Over 1 Million Premium Members And Get More In-Depth Stock Guidance and Research
By Adam Levine-Weinberg - Feb 12, 2018 at 7:20AM

Tesla is having trouble hitting its gross margin target. As a result, it's in danger of losing the race to bring truly affordable electric vehicles to market.

During the past five years, Tesla (TSLA 4.53%) has revolutionized the auto industry, by proving that electric vehicles could be cool -- and commercially successful.

Last year, Tesla took a big step forward by entering the mass market with its Model 3 sedan. The initial ramp-up of production has been slower than planned. Still, CEO Elon Musk and his team at Tesla are confident that the company will be able to build 5,000 Model 3s per week by June -- more than twice as many as it built in the entire fourth quarter.

However, Tesla hasn't shown that it will be able to build an affordable electric car profitably. With numerous major automakers moving quickly into the electric-vehicle (EV) market -- led by General Motors (GM 5.55%) -- Tesla may be running out of time to secure a leading position in the EV market.

Tesla has a profitability problem

Some Tesla bears argue that the company is a disaster waiting to happen, because it has been consistently unprofitable, while free cash flow has been deep in the red. However, Tesla's losses and its cash burn can be explained by the big investments it is making to enable growth. For example, the company is rapidly expanding its production capacity while pouring huge amounts of money into R&D. Tesla has been investing heavily to bring the Model 3 sedan to market. Image source: Tesla.

On the other hand, Tesla's low gross margin is a valid concern. Excluding the benefit from selling zero-emission vehicle (ZEV) credits, Tesla's gross margin fell to 13.8% last quarter from 22.2% a year earlier. (The company's target is 25%.)

Some of this decline was caused by inefficiencies related to the Model 3 production ramp-up, but Tesla is also experiencing margin pressure on its fully mature Model S and Model X vehicles. Meanwhile, on Tesla's recent earnings call, management stated that Model 3 gross margin probably won't reach 25% until next year. This suggests that Tesla may need to reach its target of building 10,000 Model 3s per week to achieve a 25% gross margin. And even that may be a best-case scenario, considering the company's history of overpromising.

Tesla's plan for reaching its gross margin target should be even more worrisome to investors. Management explicitly stated that it wants to push more of its Model S and Model X production toward the priciest, most profitable versions of those models.

Tesla seems to be resorting to the same tactic for the Model 3, which is a much more significant decision. After all, even the cheapest versions of the Model S and Model X are extremely expensive. By contrast, the Model 3's affordability is supposed to be a key selling point.

The Model 3 theoretically has a $35,000 starting price, but it's not clear when Tesla will start to produce this base model. For the time being, it is only building a top-of-the-line $49,000 version of the Model 3. Recently, Tesla pushed back its estimate of when the base model will be available to late 2018. This move could have significant ramifications on price-sensitive customers who were counting on getting the $7,500 federal tax credit (which will phase out over time) just to afford the $35,000 base model.

General Motors is coming for Tesla -- and others aren't far behind

It's quite possible that Tesla will be able to fill up all of its relatively limited 2018 production capacity without building base model versions of any of its three models. However, Tesla will never live up to investors' expectations if it needs to charge at least $40,000 per car to make a decent profit.

Right now, Tesla doesn't face much competition in the EV market. GM's Chevy Bolt has been a modest success, with more than 23,000 deliveries in the U.S. last year, but there aren't any other serious contenders in the long-range EV market right now. The industry landscape is set to shift dramatically over the next few years, though. 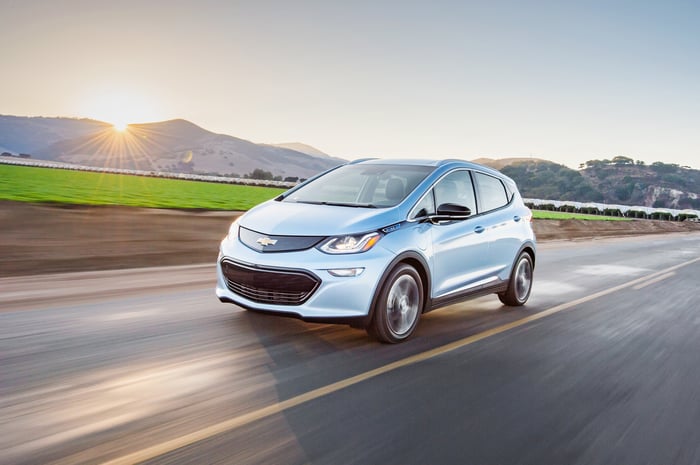 The Chevy Bolt is the Model 3's only major competition for now. Image source: General Motors.

For example, General Motors plans to introduce at least 20 new EV models by 2023, with most of those arriving in 2021 and thereafter. Late last year, the company revealed that it is working on a new battery system that will reduce the cost per cell by at least a third compared to the Bolt, while providing improved performance. Furthermore, GM is planning for a modular EV architecture, enabling it to develop all of these disparate models at a low cost.

GM thinks that within a few years, it will be able to build affordable long-range EVs profitably, with a focus on the desirable crossover/SUV market segments. Many of the other top global automakers are pursuing the same goal -- and aren't far behind General Motors.

Thus, the EV market is going to become extremely crowded within the next five years. Tesla is already very successful in the luxury end of the market, and that's not likely to change, even with an uptick in competition. But unless the company can figure out how to build an affordable electric car within the next year or two, it is likely to cede most of the mass market to traditional automakers.