Virtually no Americans are paying taxes on their cryptocurrency profits -- at least not yet.

It's been a slow day for the major cryptocurrencies on Tuesday, with values for bitcoin, Ethereum, Ripple, Bitcoin Cash, and Cardano barely changed over the past 24 hours. After a multiday rally that sent all of the leading cryptocurrencies up by double-digit percentages in the past week, it appears that the market could be running out of steam, at least temporarily.

Despite the quiet on that front, though, there could be trouble on the horizon for many cryptocurrency investors, based on a new Credit Karma study. It appears that few investors are reporting cryptocurrency profits on their 2017 tax returns, which could mean many of those who have made money from them will owe penalties and back taxes down the road. 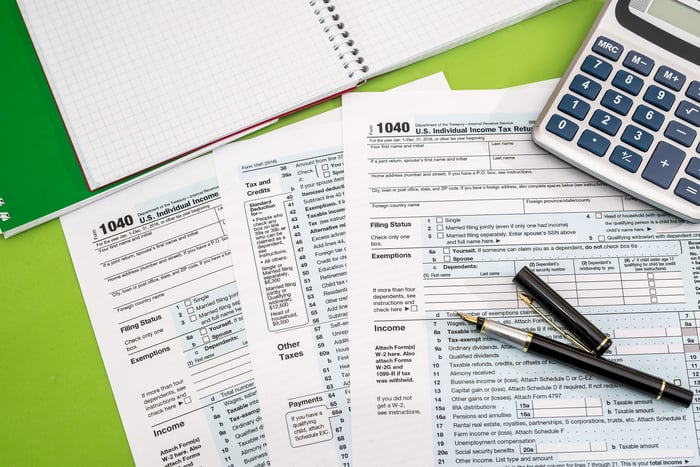 First, here's a quick look at the five largest cryptocurrencies by market capitalization and how much each has changed over the past 24 hours.

Data source: www.investing.com. Prices and daily changes as of 3:30 p.m. EST on Feb. 13, 2018, and prices are rounded to the nearest cent where appropriate.

Bitcoin's value increased more than tenfold in 2017, and many other cryptocurrencies performed even better. According to estimates, about 7% of Americans own cryptocurrencies, and a recent Credit Karma survey found that 57% of cryptocurrency owners have realized gains on their investments. So, it's safe to assume that a significant number of investors have made a profit from them.

However, you wouldn't know that based on their tax returns. Fewer than 100 out of 250,000 Americans who have filed taxes using Credit Karma have reported any taxable cryptocurrency gains for 2017. That's a rate of less than 0.04%. What's more, only one person out of the quarter-million tax returns disclosed a "significant" gain or loss.

To be fair, people with large capital gains who expect to owe money tend to file later in the season, so I expect an uptick in the number of returns with cryptocurrency profits as we get closer to the April tax deadline. Even so, 0.04% is an alarmingly low rate.

If you made any profits on the sale of cryptocurrencies, it's important to realize that they are considered to be capital gains for tax purposes. In other words, they are governed by the same tax rules that apply if you had sold stock for a profit.

Long-term capital gains -- if you held your cryptocurrency for over a year -- are taxed at more favorable rates, while short-term gains are taxed as ordinary income. For example, someone who bought bitcoin and sold it a few months later at a $10,000 profit, and is in the 25% federal income tax bracket for 2017, would owe the IRS $2,500.

Don't mess with the IRS

Finally, it's also important to realize that the IRS knows that there's money being made in cryptocurrencies, and is taking steps to come after people who don't pay taxes on their gains. Last year, for example, it sued Coinbase for access to customer records after only about 800 people reported any bitcoin gains or losses in 2015.

The IRS can and will come after people who made money on cryptocurrencies in 2017, and will not only send a bill for taxes due but can assess penalties and interest for underpayment of tax.