Its decision to expand its reservation business may have been too long in coming.

Yelp (YELP 0.51%) wants to spend its way to growth after another disappointing quarter, and the market didn't like what it saw. As it transforms itself from simply a listing and review site to one that is more deeply involved in the transaction side of the equation, Yelp may have missed the prime opportunity to do so by about a decade or so.

He who hesitates is lost

Last March Yelp bought online reservation service Nowait, and as it seeks to strengthen its competitive position in the burgeoning restaurants category, it plans on investing heavily in the new business to increase its viability as a revenue-generating business. That means that although it's looking for it to be a profitable venture eventually, it anticipates incurring operating losses of as much as $25 million this year as a result. 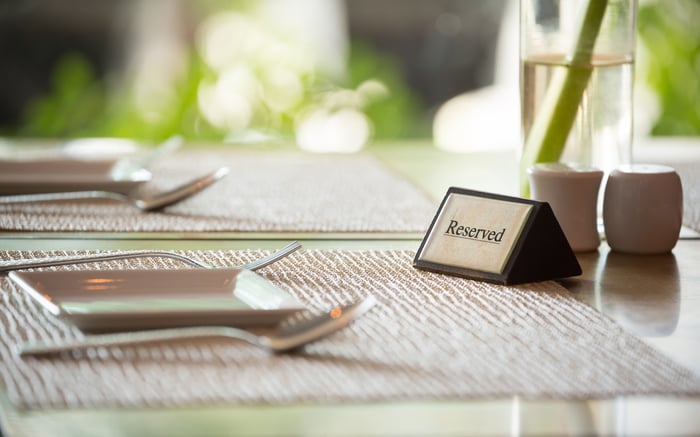 While the reservation service does provide Yelp with more opportunities to increase transaction possibilities, it's also a highly competitive market with dozens of players all vying for the same restaurants. More importantly, it will be going up against the industry leader OpenTable, which still yields a lot of clout even as its market position has declined. It might have made more sense for Yelp to go after this niche 10 years ago when there were fewer players. Today it risks being just another also-ran in the business.

There are undoubtedly some competitive advantages to Nowait's technology. Unlike OpenTable, which has diners making a hard reservation at a restaurant and charges a premium for it, Nowait essentially lets you reserve a place in line without actually having to be at the restaurant (and it offers restaurants a flat fee rather than a per-diner charge). In a sense, though, it's more like a glorified call-ahead seating arrangement.

I used Nowait when visiting Senoia, Georgia, the town that served as the backdrop for the third season of the hit TV series The Walking Dead (it was called Woodbury, the stronghold of the Governor). Wanting to visit Nic & Norman's, the restaurant owned by special effects artist Greg Nicotero and actor Norman Reedus, I downloaded the app and was able to see what the restaurant's wait time was. I added myself to the list and then was able to go about sightseeing knowing that when a table was ready at the time I selected I'd get a text message alerting me to it.

While the notification was easy to set up, the process wasn't completely flawless. As my reservation time approached, I headed back to the restaurant early and walked in, only to find the restaurant fairly empty and was able to be seated right away. In short, I might not have needed the app at all; a simple call ahead might have sufficed.

OpenTable, which is now owned by Priceline Group (BKNG 0.59%), is still the biggest reservation service. Though its share has slipped to under 50% from nearly owning the entire market a decade or more ago, it still has 40,000 restaurants around the world in its network and seats 21 million diners every month. In comparison, Nowait caters to around 4,000 restaurants.

Yet there are a ton of competitors elbowing their way into the space, including Resy, which is partnered with AriBnB; Tock; TablesReady; Waitlist Me; and dozens more. Of course, there's Yelp's own Reservation service, too, and while Nowait is competitive, the key will be to survive.

Groupon (GRPN -3.59%) acquired Savored in 2012 with the idea of launching a high-end restaurant reservation service, but after just two years Groupon Reserve was shut down. Priceline has also written down hundreds of millions of dollars on the worth of OpenTable since it was acquired, as the reservation business has become commoditized.

Analysts aren't convinced Yelp can pull it off, with one from Piper Jaffray noting, "At the end of the day, Yelp is a sales headcount driven revenue scaling model, with low client retention rates and challenges in scaling margins." He recommends taking Yelp's guidance "with a grain of salt."

Undoubtedly Yelp does need to continue diversifying away from simply being a site to review restaurants, which was novel in 2004, and a reservation service would seem to be a natural fit. But with so many reservation options available and more always coming online, Yelp may have waited too long to make the leap.