Please ensure Javascript is enabled for purposes of website accessibility
Log In Help Join The Motley Fool
Free Article Join Over 1 Million Premium Members And Get More In-Depth Stock Guidance and Research
By Brian Feroldi - Updated Feb 20, 2018 at 8:15AM

The leading provider of services and data for the life sciences industry posted double-digit gains in revenue and profits.

IQVIA Holdings (IQV 1.07%), which was formerly known as Quintiles IMS Holdings, reported its fourth-quarter and full-year results on Wednesday, Feb. 14. Revenue and profits continued their upward climb as the company's push into technology helped it win more than its fair share of new business.

Let's put IQVIA's results under the microscope to learn more about why it performed so well during the period. 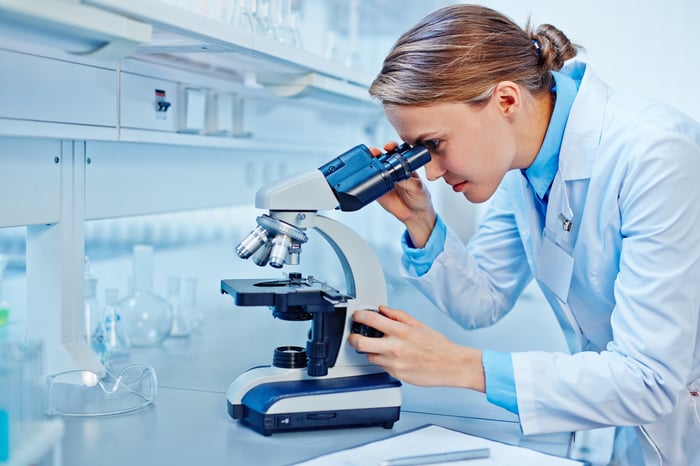 What happened with IQVIA this quarter?

Zooming out to the full year, here's a review of IQVIA's headline numbers from 2017:

It is important for investors to remember that these eye-popping profit growth numbers are still being heavily impacted by the merger of Quintiles and IMS Health in 2016.

Here's what IQVIA's CEO Ari Bousbib had to say about the quarter: "We closed out the year with fourth-quarter financial results on or above our targets, driven by strong operational execution. We are pleased with our progress during our first full year as a merged company and look forward to delivering another solid performance in 2018."

On the investor call, CFO Mike McDonnell spent a great deal of time explaining that the company has adopted a new accounting standard called ASC 606 as of Jan. 1, 2018. This change will impact the company's revenue recognition policy and hence will make year-over-year comparisons difficult. To account for this change, McDonnell provided investors with guidance for 2018 that assumes that ASC 606 had been adopted in 2017 as well so investors can make an apples-to-apples comparison.

Knowing that, here is the guidance that management is offering for the full year 2018:

And here's what management is projecting will happen in the first quarter of 2018:

McDonnell ended his prepared remarks on the investors' call by summarizing the company's key accomplishments in 2017: "We successfully merged two large organizations, repositioned the company in the market and rebranded the company as IQVIA, and of course, we were honored to be included in the S&P 500. We look forward to delivering another year of strong financial performance in 2018."