Please ensure Javascript is enabled for purposes of website accessibility
Log In Help Join The Motley Fool
Free Article Join Over 1 Million Premium Members And Get More In-Depth Stock Guidance and Research
By Neha Chamaria - Feb 23, 2018 at 6:12AM

Around this time two years ago, Caterpillar Inc. (CAT -2.57%) was trading at roughly $65. The stock has since stunned the market, more than doubling in value.

The rally appears to have left some investors worried, though, which is why the stock has shed nearly 8% in the past month, as of this writing, mainly on profit booking. You might, however, want to consider this drop an opportunity once you look at Caterpillar's growth prospects and the stock's current valuation.

Caterpillar stock ended 2017 with a whopping 70% gain, fueled largely by earnings beats from the company quarter after quarter, to give investors an inkling that they might be underestimating the bellwether's turnaround prospects.

Caterpillar recently reported strong numbers for fiscal year 2017 and topped it up with an encouraging outlook for 2018.

One number that stands out in the above table is Caterpillar's operating margin. If you were to dissect the growth in its operating profit last year, nearly 65% of the increase came from higher sales volumes, which confirms an up cycle. Management's aggressive restructuring efforts further helped lower costs and boost margins. 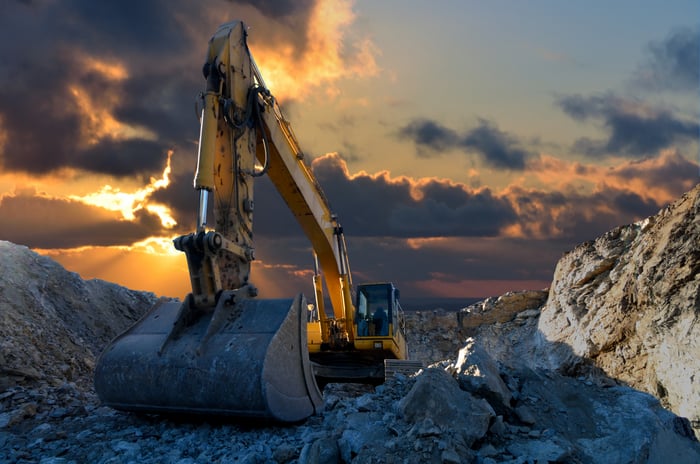 What matters most is that Caterpillar is experiencing a broad-based recovery in sales across all of its businesses: construction industries, resource industries (primarily mining equipment), and energy and transportation. That should make Caterpillar's recovery sustainable. There are two other important points worth noting here:

In short, the recovery in Caterpillar shares reflects growth in the company's sales and profits, and it could be wrong to assume that the stock has run its course. Let me tell you why.

2018: Another strong year in the making

Caterpillar foresees growth in "many end markets" this year and expects to earn $7.75-$8.75 per share in fiscal 2018, backed by higher sales volumes, favorable price realization, and lower restructuring costs, among other things.

That would be a massive jump over Caterpillar's 2017 EPS, but it's important to understand that the growth in the company's profits look exceptionally good right now as it's coming off a very low base, thanks to a severely challenging few years. Growth will gradually taper with every passing year.

Nonetheless, 2018 will likely go down in Caterpillar's history as one of its best years ever in terms of profitability. Let's also not forget that the company's outlook does not include any impact from a potential infrastructure bill. As the world's leading construction equipment manufacturer with a solid brand power, Caterpillar could be one of the biggest beneficiaries when infrastructure spending in the U.S. kicks off.

More importantly, Caterpillar's cash flows should also grow as its profits climb, which is where the stock starts looking like a buy right now.

A rigorous focus on maintaining its cash flows even during the most challenging times is one of the biggest reasons why Caterpillar could avoid a dividend cut and is so well positioned to ride a recovery.

Interestingly, Caterpillar is trading significantly cheaper than Deere on cash flow metrics, as well as the enterprise value to earnings before interest, tax, depreciation, and amortization ratio (EV/EBITDA), which is a useful metric to value and compare capital-intensive companies. 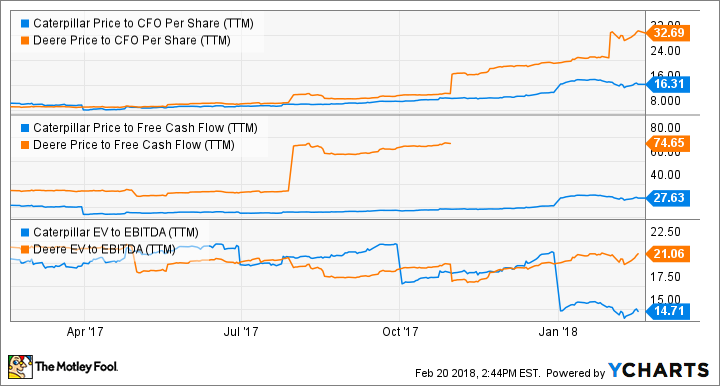 CAT price to CFO per share (TTM) data by YCharts.

When you combine the potential uptick in Caterpillar's end markets such as mining, oil and gas, and infrastructure, its strong FCF trend, and a dividend yield of 2%, it looks like the stock should offer long-term investors good upside even at current prices.