Please ensure Javascript is enabled for purposes of website accessibility
Log In Help Join The Motley Fool
Free Article Join Over 1 Million Premium Members And Get More In-Depth Stock Guidance and Research
By Keith Speights - Feb 27, 2018 at 7:32AM

It's not the past nor the present that should concern Exact Sciences investors.

For most of 2017, Exact Sciences (EXAS -6.78%) performed to near-perfection. By the end of October, the molecular diagnostics stock had quadrupled in value. And while Exact Sciences lost some steam toward the end of last year, its shares still ended 2017 up an impressive 293%.

That was then. So far in 2018, Exact Sciences stock is down nearly 20%. The one-time highflier is now in serious pullback territory. Should investors worry? Here are two reasons why they shouldn't -- and one reason why they should. 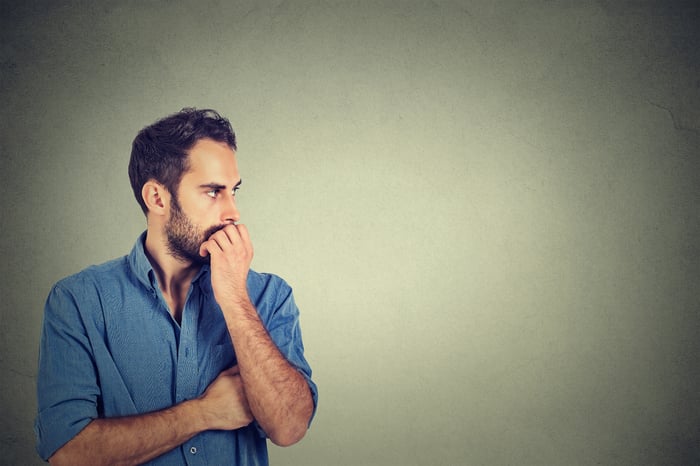 One major factor behind Exact Sciences' floundering stock performance so far in 2018 is that the company gave a sneak peek at its fourth-quarter results on Jan. 8 that disappointed investors, causing its share price to tumble. When the company reported the actual Q4 results on Feb. 22, they matched Exact Sciences' preliminary numbers.

But investors don't have any reason to get worked up about the company's performance in the fourth quarter. It was actually very good. Total revenue soared 148% year over year to $87.4 million. That was well above the consensus Wall Street revenue estimate of $79.1 million.

Investors were apparently hoping for an even stronger fourth quarter, but the reality is that Exact Sciences turned in a strong performance that gave no cause for alarm about its future.

However, Exact Sciences' guidance for the first quarter of 2018 provided in its Q4 update did seem to give a legitimate reason for concern. The company projected 176,000 to 181,000 completed Cologuard tests in Q1, reflecting weak quarter-over-quarter growth of only 3% at most.

Should investors fret? I don't think so. It's important to understand the reason behind the low growth expected in the first quarter.

Exact Sciences' disappointing guidance stemmed from a really nasty flu season. The company said that many physicians were limiting wellness visits or even rescheduling them until after the flu season is over. This negatively impacts the number of Cologuard tests that are prescribed, because colon cancer screening is typically discussed during wellness visits.

Despite the flu-related weakness in Q1, though, Exact Sciences still thinks growth will again be strong in 2018. The company expects revenue between $420 million and $430 million, which would reflect a year-over-year increase of 60% at the midpoint of the range.

The main reason to worry

There is one thing that Exact Sciences investors should care about, however. Other companies are scrambling to develop liquid biopsies to detect cancer at early stages. One potential rival appears to have its eyes set on dethroning Cologuard as the preferred alternative to colonoscopies.

Researchers recently presented findings that showed a blood test developed by CellMax Life was highly accurate at detecting colon cancer. This liquid biopsy detects even small amounts of circulating tumor cells (CTCs), cells that are discarded from a tumor.

CellMax Life already sells its blood test for early detection of colon cancer in Taiwan, but the company plans to start U.S. studies of the test this year. CellMax Life CEO Atul Sharan thinks the liquid biopsy could be sold at a cost of close to $150 in the U.S. if approved. By comparison, Exact Sciences recognized revenue per Cologuard test of $498 in the fourth quarter.

But don't worry too much just yet

If a low-cost and highly accurate blood test for detecting colon cancer enters the U.S. market, it would be very bad news for Cologuard. However, there are several reasons why Exact Sciences investors shouldn't be distressed just yet.

First, it will be a while before any liquid biopsy wins regulatory approval. Second, there's no guarantee that the cost and accuracy of a test will beat Cologuard. For example, CellMax Life's test currently sells in Taiwan for around $500, close to Cologuard's price.

Perhaps the primary reason for investors not to be overly troubled at this point is that Exact Sciences is developing its own liquid biopsies. At the J.P. Morgan Healthcare Conference in January, Exact Sciences CEO Kevin Conroy noted that his company's collaboration with the Mayo Clinic has generated three study results so far that showed 90% or greater sensitivity and specificity in detecting cancer in liquid biopsies. Conroy maintained that the approach taken by Exact Sciences has competitive advantages including low cost and quick turnaround.

The best way for Exact Sciences to reassure anxious shareholders is to keep posting strong growth for Cologuard and to achieve success in its liquid biopsy development program. I expect the company to definitely achieve the former goal. How well it performs on the latter goal will make the difference as to whether Exact Sciences continues to be a top stock a few years from now.