The live entertainment business is strongly seasonal, with far larger audiences and ticket sales during the summer. That being said, Live Nation's fourth quarter showed the fastest year-over-year growth since the year-end period of 2011.

On top of the seasonal effects, Live Nation recorded a $110 million legal settlement expense in the fourth quarter. In that proceeding, ticket-selling start-up Songkick accused Live Nation of blocking the smaller company's access to concert tickets for presale. The case was settled just days before the scheduled trial, and Live Nation ended up buying some of Songkick's patents and technology assets. 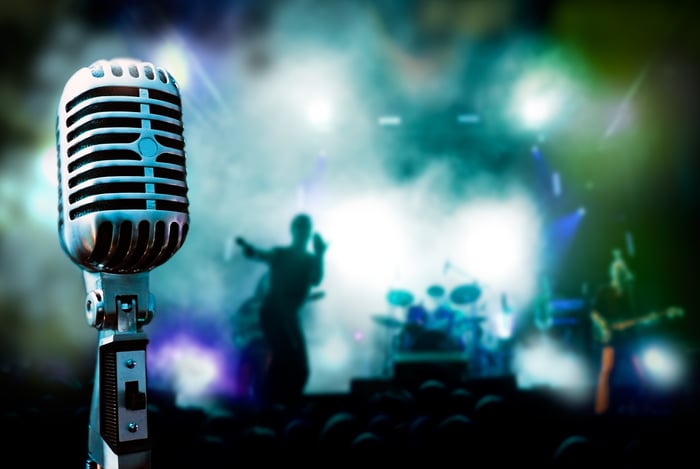 In a prepared statement, Live Nation CEO Michael Rapino extolled his company's efforts to grow and support the music business as a whole.

"Across all of the artists we work with, we invested $5.6 billion to promote 30,000 shows in 40 countries, with Live Nation by far the largest financial supporter of artists in music," Rapino said. "In 2017, we built on our leadership position across our business, with double-digit fan growth in both North America and internationally, and across arenas, stadiums, festivals, and theaters and clubs."

Live Nation's main growth strategy is to invest in arranging more concerts around the world, and high-margin business such as ticket distribution, sponsorship deals, and on-site spending will follow. This idea has been working for the several years, and nothing is changing in 2018.

Ticketmaster's ticket sales rose 5% year over year in the first six weeks of 2018, over 70% of the coming year's sponsorship opportunities have already been contracted, and on-site experience improvements will continue. Overall, Live Nation expects "strong growth" across all of its segments this year.