Please ensure Javascript is enabled for purposes of website accessibility
Log In Help Join The Motley Fool
Free Article Join Over 1 Million Premium Members And Get More In-Depth Stock Guidance and Research
By Eric Volkman – Mar 9, 2018 at 9:45AM

Or, "How to invest in two solid up-and-comers for the price of a few lattes."

Everybody likes a bargain, particularly if they're hunting for inexpensive stocks that have the potential to deliver. The universe of sub-$10-per-share companies is larger than one might think; my casual search through an online stock screener for issues at that price level with market caps above $200 million yielded nearly 600 results.

That's a big number, and of course many of those names weren't all that inspiring. There are a few nuggets scattered in that bunch, though, and I've picked out two that are particularly intriguing. 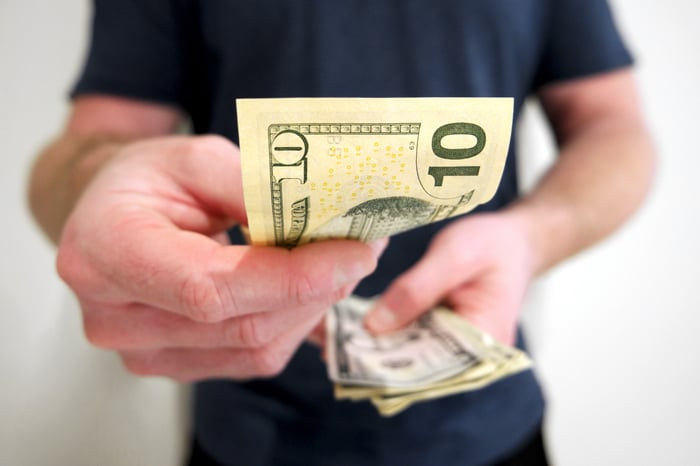 This decade has been a good one for SiriusXM Holdings (SIRI -1.21%). Robust sales of new cars, on the back of an improving economy, have been a big catalyst for the stock. Helpfully, the company is basically the only game in town for satellite radio broadcasting, which is an increasingly popular feature in new vehicles.

After struggling in the aughts with frequent net losses and anemic subscriber count despite heavy spending on marketing, the company was effectively bailed out by Liberty Media in 2009. Since then, it's been firmly in the black on the bottom line, with revenue that has increased sharply over the past few years.

Its latest all-time-high top-line figure was $5.4 billion for 2017, an 8% improvement over the previous year, on a subscriber count that rose 4% to almost 33 million. Net income, when adjusted for a $185 million charge connected to tax reform, was 12% higher at $833 million.

Investors are catching on to the fact that the company is in an excellent position, and fully taking advantage of it. Even mildly disappointing guidance in its fourth-quarter and 2017 results announcement hasn't stopped the advance of the stock price, which is now at its highest level so far this decade. Still, the shares remain well under $10 a pop (at roughly $6.50), with a five-year forward PEG ratio barely above 1.

To some degree, Telefonica (TEF) is in a similar place as SiriusXM was at the end of the last decade. The Spain-based global telecom conglomerate has been spending generously, to the detriment of profitability, its balance sheet, and investor popularity.

The goal is to boost its mobile offerings in promising markets. The company is particularly active in Latin America, a region whose collective economy is anticipated to grow at encouraging rates over the next few years. The heavy investment activity puts Telefonica in a fine place to reap the benefits of increased customer spending on attractive telecom offerings such as mobile data plans.

The big downside of this, naturally, is that higher capital expenditures leech profitability. And while investors wait patiently for new-ish revenue streams to thicken, the company's top line has dipped during the transition from an old-line telecom to a 21st-century operator.

The price of Telefonica's American Depositary Receipts (ADRs) has gone in the same direction. They've shed nearly half their value over the past few years, pushing them below that magic $10-per-share level.

That's a hard-to-resist bargain for a busy global operator that will rise again. On top of that, the company pays a relatively rich dividend that yields almost 5%, giving the stock the wonderful combination of growth and income.

As mentioned, there were more than a few pieces of gold in that nearly 600-long list I culled from the stock screener. These are two of the more compelling ones, but there are others in the pile. Watch this space for more in the future.