Shares of American Eagle Outfitters (AEO 4.10%) fell over 9% after the apparel retailer reported its fourth quarter earnings on Mar. 8. The decline was surprising, since the results looked solid, guidance exceeded expectations, and the company hiked its dividend.

But even after that plunge, American Eagle shares remain up over 30% in the past 12 months, doubling the broad market's rally. I've owned American Eagle stock for some time, and I think that this post-earnings dip represents a good buying opportunity. 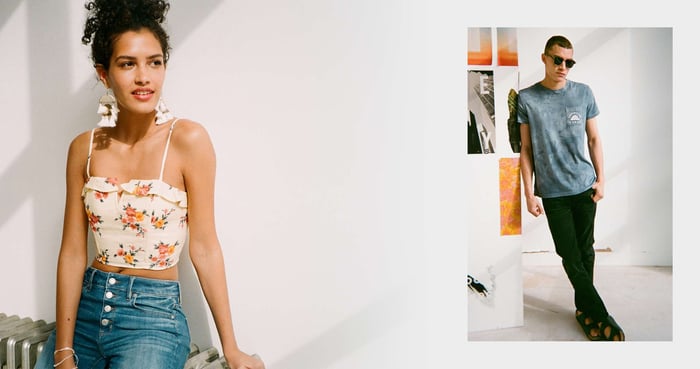 American Eagle revenue rose 12% annually to $1.23 billion for the quarter (which included an extra week compared to the prior year), beating expectations by $20 million. Excluding the $43 million in sales from the extra week, its sales would have risen 8%.

These figures represent the company's strongest sales growth since the second quarter of 2015. Comparable store sales (which include the same number of weeks for both periods) rose 8% year over year -- its highest level for this metric since the third quarter of 2015.

That jump was fueled by 5% comps growth at its namesake brand and a whopping 34% comps growth at Aerie, its lingerie and activewear brand for younger women. Both figures accelerated from previous quarters:

The company attributes the turnaround at American Eagle to improved mall trends, strong sales of jeans, rebounding interest from male shoppers, the popularity of its "AEO Connected" loyalty program, and its expansion into overseas markets like India.

American Eagle also remains a top brand among U.S. teens. In Piper Jaffray's "Taking Stock with Teens" survey last fall, American Eagle was ranked as the second most popular clothing brand after Nike, and the third most popular shopping website after Amazon and Nike.

Meanwhile, Aerie continued gaining ground as an "anti-Victoria's Secret" with its untouched ads featuring body-positive female models. It also grew its social media following by 28% and expanded its customer base at a double-digit pace last year. Only 50% of the company's female shoppers currently also shop at Aerie, which gives the brand plenty of room for growth.

The company's digital business also grew 20% annually during the quarter, accounting for nearly 31% of total revenue, compared to 27% in the prior year quarter. In addition to letting shoppers place orders, the app is integrated with its loyalty program, AEO Radio, and social media channels for sharing looks.

So why did the stock sell off?

Investors weren't thrilled that some of American Eagle Outfitters' top line growth was fueled by higher markdowns. This caused its gross margin to contract from 35.4% in the prior year quarter to 34.6% -- which missed the consensus estimate of 35%.

Inventory also rose 11%, partly due to the use of clearance stores to liquidate some stock. However, the company noted that the higher inventories also reflected "strategic investments in men's and women's bottoms, women's tops and Aerie apparel to support strong sales trends and new stores."

Despite those challenges, adjusted earnings rose 13% to $0.44 per share during the quarter, meeting analyst expectations.

For the current quarter, American Eagle expects a mid-single digit increase in comps with 25% to 38% earnings growth.

For the full year, Wall Street expects revenue and earnings to rise 2% and 22%, respectively. Those strong earnings estimates indicate that the company's gross margins will likely stabilize again, as they did over the past five years: 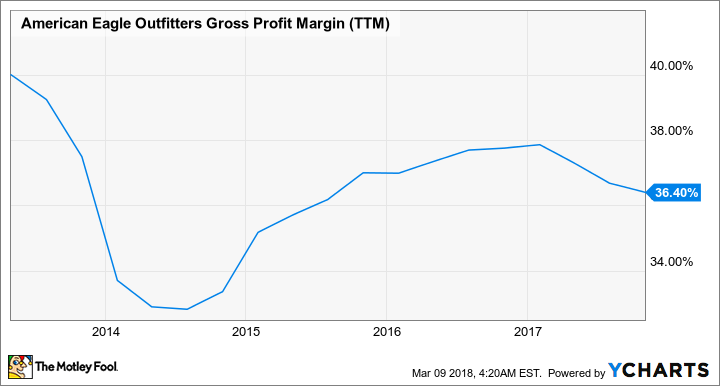 American Eagle also boosted its dividend by 10% to $0.1375 per share, representing its first dividend hike since 2013. That increase, which raises its yield to 2.8%, indicates that management finally has more confidence in its future earnings growth.

The company plans to open 15 to 20 American Eagle stores and 35 to 40 Aerie stores in 2018. It will also keep expanding into overseas markets, explore synergies between the two brands, and integrate smaller brands like Tailgate into the mix. These moves all indicate that the core business remains healthy, and that American Eagle Outfitters is still a "best in breed" play in the tough retail apparel market.