More specifically on the former -- and keeping in mind Camping World only just announced strong fourth-quarter results in late February -- late yesterday the company revealed it has since determined that a portion of a deferred tax asset related to a recent acquisition is not expected to be realized in the foreseeable future. And because it should have established a valuation allowance on a portion of that asset, it restated its financial statements to reflect as much. 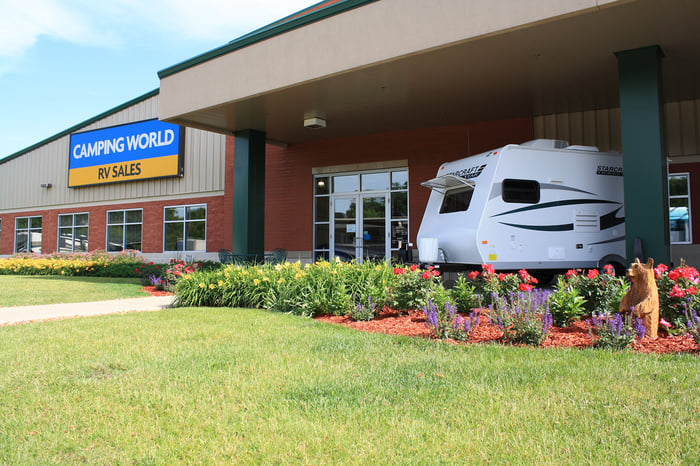 To be fair, this was a non-cash adjustment that had no impact on Camping World's revenue or adjusted net income, the latter of which already excludes unusual items such as one-time tax adjustments, stock-based compensation, and restructuring expenses. Still, this was an undeniably positive adjustment that the market was more than happy to embrace.

If that wasn't enough, early today Camping World also announced it has agreed to acquire Arkansas-based River City Recreation World -- a move the company says is "in line with [...] future growth plans."

"We will actively pursue opportunities in our existing markets over the next few years to expand market share, grow our database and add additional distribution points for our products and services," added Camping World COO Brent Moody. "The addition of River City RV will accomplish all three objectives and add a top dealer in the state of Arkansas."

Camping World further teased that it plans to announce "several additional markets of expansion throughout the country in 2018."

In the meantime, after coupling yesterday's positive earnings adjustment with Camping World's latest strategic purchase, it's no surprise to see the stock rallying in response today.