It's very rare these days to find a legitimate asset class that can deliver yields above 10%. Mortgage real estate investment trusts -- mREITs -- are an exception. These businesses invest in the securities that underpin real estate loans. This is in contrast to their far more numerous cousins, equity REITs, which own and operate the real estate itself.

There's an old phrase -- the higher the reward, the higher the risk. Annaly Capital Management (NYSE:NLY), the king of the mREIT segment, currently pays a dividend that yields a sky-high 11.3%. Here's my take on whether that's too rich (read: risky) or a suitable payout for an attractively priced stock. 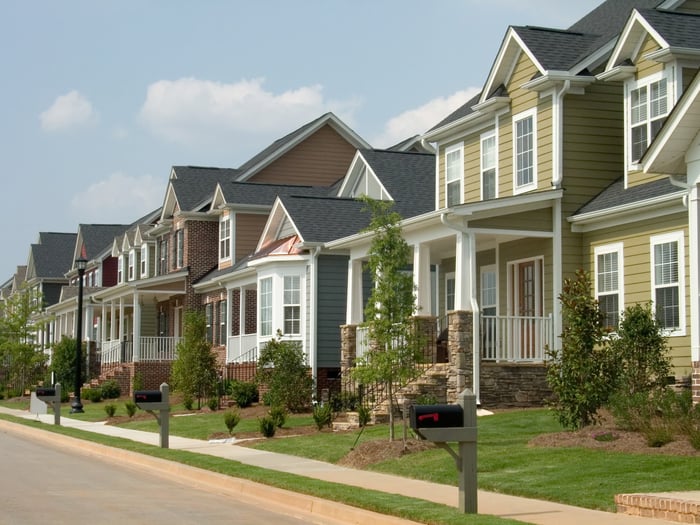 Bang for the buck

mREITs are volatile investments, and there are several reasons for this. They make their money on the spread between what they pay for their mortgages or mortgage-backed securities (MBSes, a far more typical investment for mREITs) and their short-term financing costs.

We're not talking huge gaps here. For example, in its most recently reported quarter, Annaly's adjusted net interest spread was 1.19%. Its much smaller peer Two Harbors (NYSE:TWO) also came in under 2%, at 1.97%.

These aren't big numbers, so mREITs need to invest vast sums in order to make meaningful profits. They do this by borrowing heavily: Annaly's leverage ratio at the end of 2017 was 5.7 to 1, while Two Harbors' stood at 5.9 to 1.

This combination of aggressive borrowing and thin spreads makes mREITs particularly susceptible to increases in interest rates. Even a small uptick can squeeze that spread and put millions of dollars in profits in immediate jeopardy.

We're in a slow but sure rising interest-rate cycle at the moment, so a key question of Annaly's soundness as an investment is an obvious one: How has it been coping with the Fed's interest-rate bumps? (For those who don't have these moves burned into memory, last year, the target Fed Funds rate was raised from 0.75% to 1.00% in March, then to 1.25% in June, and finally to 1.50% in December.)

Annaly handled the upticks pretty well. Its net interest spread, with mortgage premium amortization stripped out, actually rose by 4 basis points in its Q4 of fiscal 2017 on both a year-over-year and quarter-over-quarter basis (to 1.19%). And it managed to grow key fundamentals while doing so.

Zooming out to the entirety of the fiscal year, total assets rose a muscular 16%, to almost $102 billion, as did adjusted earnings, which landed at slightly more than $1.4 billion. Meanwhile, that leverage figure actually represented a slight decline. At the end of 2016, it was 5.8 to 1.

As it has in the past, Annaly seems to be proving that it can maintain its spread while improving the bottom line. To play devil's advocate for a moment, I wouldn't say it's operating in a particularly challenging environment. Those interest-rate rises aren't exactly coming fast and steep, and a still vibrant housing market is supporting the residential mortgage segment in which Annaly specializes.

Still, the mREIT's consistently good performance of late gives hope for the future. Compounding this, it seems interest rates will keep going up only marginally and the housing market still has legs. This should at least support the current dividend, which, let's face it, is a major attraction of the stock.

Annaly's shares have lost 11% of their value so far this year. I think much of this has to do with fears that mREITs, as a whole, will be hurt by rising interest rates. (Generally, mREITs have traded down over the past few months). Annaly, I believe, can still do well with higher rates, and the other aforementioned factors help its prospects, too. I think the price weakness provides a good opportunity to buy the company's stock.