In the age of e-commerce, many department stores have been left for dead by investors. The department store model is under severe pressure from online shopping and lower mall traffic, and this has caused most department store names to greatly lag the market over the past few years.

Recently, however, a series of positive earnings reports, combined with a positive retail sales report, sent certain names skyrocketing; most notably, Dillard's (NYSE:DDS), which rose more than other strong names in the space. 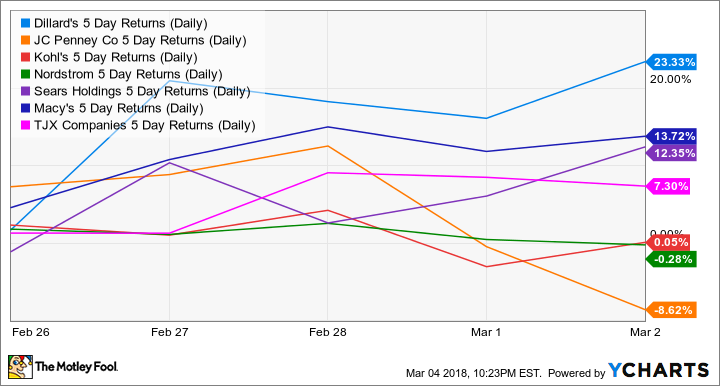 While Dillard's earnings report on Feb. 27 was among the strongest of the group, there are also other reasons the stock has soared, mostly having to do with its ownership structure. Here are the ins and outs of the quarter, and the additional reason behind Dillard's big gains.

Indeed, Dillard's delivered a really strong quarter, at least by department store standards: Revenue increased 6.6% year-over year to $2.11 billion (beating estimates by $80 million) and earnings per share (adjusted for the effect of tax reform) came in at a whopping $2.82, well above consensus estimates of $1.77. The results were bolstered by especially strong sales in apparel across men's, women's, and junior categories. Comparable-store sales came in at roughly 3.3%, the first positive comp Dillard's posted since the second quarter of 2015.

And while many thought massive discounting would weigh on margins, Dillard's actually reported a surprising 48-point gross margin improvement in retail operations over the prior year's fourth quarter. That was a big change from the previous three quarters. In fact, for the full year, the company reported a gross margin decline of 65 basis points due to aggressive discounting earlier in the year.

On the heels of the positive fourth-quarter report, investor sentiment was further bolstered by a positive retail sales Census report, which showed department stores actually growing January sales 0.8% from the month of December, far better than the overall retail industry's monthly decline of (0.3%).

These numbers were good, but they don't explain the entirety of the huge 24% move in Dillard's stock from the day before the earnings report to March 2. Here's what added fuel to the fire. 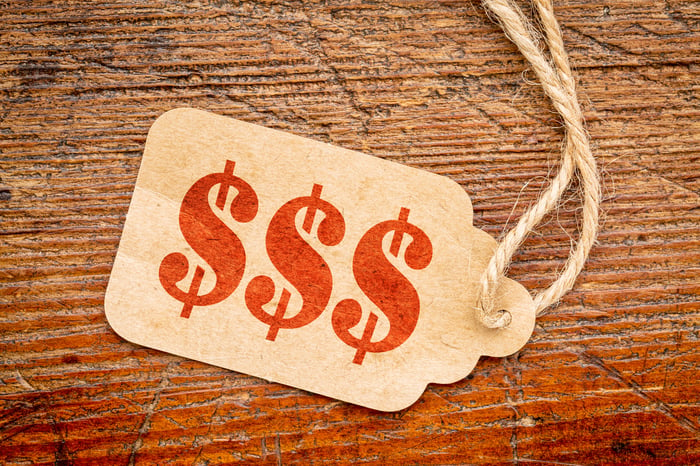 Dillard's does it differently

The extra element that catapulted Dillard's rise is its concentrated ownership structure, combined with a very high short interest. The company is closely held by the namesake Dillard family, and the largest shareholder is actually the the company's own employee 401(k) plan.

According to last year's proxy statement, the company's 401(k) plan owns 7.9 million shares, while the company's executives and directors combined owned roughly 8.3 million shares, divided roughly between Class A shares and Class B shares, the latter of which are owned by the Dillard family and hold most of the voting power. That inside ownership makes up roughly 58% of the total shares.

Out of the remaining 12 million shares of public "float," roughly 7.3 million shares are held by short-sellers, who make money if a stock falls and were likely betting on further same-store sales declines and an overall deterioration of the department store business. But when short-sellers crowd into a trade that goes against them, it can lead to a painful run for the exits as they must then buy shares, or "cover," at higher and higher prices. If there aren't enough shares to buy back, that can lead to a huge spike in the price.

It also doesn't help the shorts' case that management has been plowing virtually all of its free cash flow into share repurchases. In fact, over the past year, Dillard's repurchased 4.1 million shares for around $219 million (working out to about $54 per share, well below the current price of $88). That equates to a very significant 12% of shares outstanding. The combination of huge share repurchases and a low float means that short-sellers are increasingly under more and more pressure.

Clearly, Dillard's isn't a typical company. For instance, it doesn't do earnings calls and does very little to promote its stock. Maybe that's intentional, as the company seems to be dead-set on buying up as many cheap shares as possible in a race to squeeze the shorts.

Of course, now that the company has returned to positive momentum, it would make repurchases less accretive -- not that the Dillard family would complain, I'm sure!