This high-yield enterprise is getting a new CEO sooner than planned.

It looks as if CenturyLink's (LUMN -0.91%) integration with Level 3 Communications will get a jump-start, as COO and former Level 3 CEO Jeff Storey will replace CenturyLink's current CEO Glen Post III sooner than expected. Storey was already set to take over as CenturyLink CEO in 2019, but that timeline has moved up to the annual shareholders meeting this May. Furthermore, Post will not become executive chairman as planned (but will still join the board), "in order to ensure there is clarity that Jeff will be CenturyLink's new leader."

The news is a bit of a surprise that could signal either positives or negatives for CenturyLink. Here's what investors need to know. 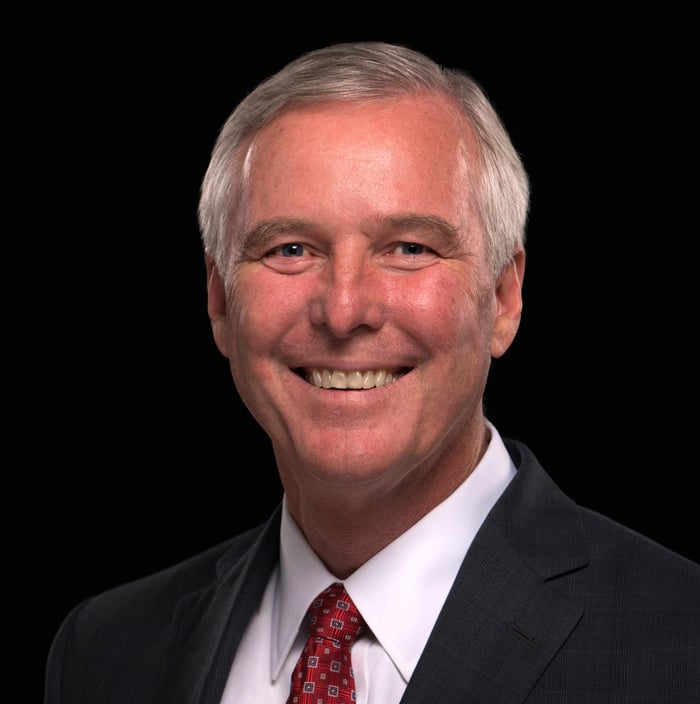 If you recall, CenturyLink announced its buyout of Level 3 all the way back on Halloween of 2016 in a cash-and-stock deal valued at $34 billion, including debt. Originally, Post was going to continue serving as CEO, with Level 3 CFO Sunit Patel becoming CFO of the combined entity and Storey joining the board.

That arrangement did not go over well with activist investor Keith Meister of Corvex Capital, who subsequently bought a large position -- about 6.6% of the shares, including options, as of the third quarter of 2017. He publicly argued that the company should retain Storey, whom Meister called the "Tom Brady" of the telecom industry, as CenturyLink's new CEO. The company quickly went along with Meister's suggestion, avoiding a protracted battle that sometimes occurs when an activist investor butts heads with management.

The merger finally closed last November, over a year after being first announced and after a month of delays. Surprisingly, the stock continued to decline afterward, even though it had been predicted that the combination would greatly strengthen CenturyLink's position.

The accelerated timeline could be either a good or bad sign. In a positive light, it could mean the company has made so much progress on integration already that Storey is ready to start the job early. Management struck a confident tone in its recent conference call and analyst presentations, even declaring a quarterly dividend of $0.54 per share, which many had feared would be cut. The companies had also been preparing to merge for over a year before approval, so this scenario is entirely possible.

Of course, accelerated succession could also mean that the environment has become more challenging, and that urgent changes to the business are needed. CenturyLink's financials were declining prior to the merger amid challenging industry conditions, so this is also a possibility.

There are also mixed signals from Corvex. Interestingly, Corvex sold its entire stake -- 21 million shares -- in the fourth quarter. However, the hedge fund also bought six million CenturyLink call options as well. Call options give the holder the right to buy shares at a certain "strike price" by a certain date in the future. Options typically enable much higher returns than owning the stock outright but come with increased risk, too. In fact, Corvex had previously bought options last year that had expired worthless in October and January.

While the share sale could be a signal that Corvex's confidence in CenturyLink has waned, the call-option purchases could mean Corvex believes CenturyLink shares will appreciate quickly in the near future. The extra shares issued in the merger caused Corvex's holdings to drop below 5% of total shares outstanding, so Corvex won't have to disclose its every move anymore, except in quarterly reports.

Instead of trying to gauge the motives of a particular investor, investors in CenturyLink should assess their own risk tolerance and judgement of CenturyLink's various businesses in broadband, landlines, cable TV, and enterprise services. That's difficult at the moment, but if you believe in the merger's benefits and maintenance of the company's 13% dividend, I don't think the new succession plan should shake your confidence ... at least for the moment.