Stocks suffered a broad decline on Monday, with the Dow Jones Industrial Average (DJINDICES:^DJI) and the S&P 500 (SNPINDEX:^GSPC) losing over 1%.

As for individual stocks, Micro Focus International (NYSE:MFGP) was cut nearly in half after announcing expectations for declining sales, and Heron Therapeutics (NASDAQ:HRTX) soared on successful results from a trial of a new pain drug. 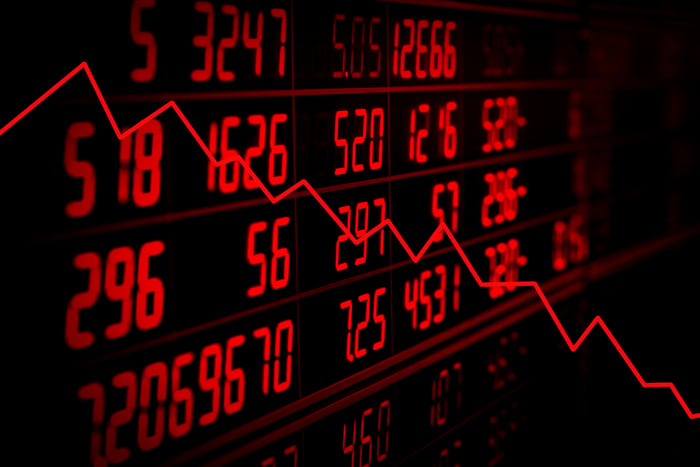 Shares of British software company Micro Focus International plummeted 46.6% after the company revised revenue projections downward for the year and announced the sudden departure of its CEO.

Micro Focus expects revenue for the fiscal year ending October 31, 2018, to decline 6% to 9% in constant currency compared with pro forma results from the previous year. The company had previously issued guidance for a revenue decline of 2% to 4%. Revenue for the first six months of the year is expected to decline 9% to 12%.

The company also announced that CEO Chris Hsu was resigning immediately "in order to spend more time with his family and pursue another opportunity," and will be replaced with COO Stephen Murdoch. Hsu came to Micro Focus from Hewlett Packard Enterprise when that company spun off its software business to merge with Micro Focus.

Micro Focus blamed issues with the integration of HPE's former software unit, along with implementation of a new IT system and "[c]ontinued sales execution issues" for the downward revision. "We remain confident in Micro Focus' strategy whilst recognising that operational issues have led to a disappointing short term performance and outlook," said executive chairman Kevin Loosemore in the press release.

HTX-011 combines the standard anesthetic bupivacaine with anti-inflammatory meloxicam and proprietary time-release technology in a drug that is applied directly to the site of tissue injury without a needle and prior to suturing. In bunionectomy patients, there was an 18% reduction in pain intensity compared with bupivacaine alone, and in hernia repair patients, the pain reduction was 21%. Pain relief continued for 72 hours after surgery.

The drug also proved to reduce the need for opioid pain medication after surgery. Over 72 hours post-hernia repair, patients on HTX-011 in the trial consumed 25% less opioids than did patients on bupivacaine alone.

"With today's results, HTX-011 is the only locally administered anesthetic to demonstrate superior pain relief and a reduction in opioid use as compared to not only placebo, but also the current standard-of-care, bupivacaine solution, in Phase 3 studies," said CEO Barry D. Quart in the press release.

Heron expects to file a new drug application in the second half of 2018. The company hopes that the drug could be an important weapon in the fight against opioid abuse, and estimates the theoretical market could be as big as $9 billion in the U.S. alone. Investors were appreciating Heron's potential today, pushing its market capitalization up to $1.8 billion.