The fear of rising interest rates has led investors to sell income-generating investments, including dividend-paying utilities. The broader utility group, for example, is down roughly 11% from the highs reached in late 2017. The stocks of Dominion Energy, Inc. (NYSE:D) and Duke Energy Corporation (NYSE:DUK), however, have both fallen slightly more than that. If you are an income investor, this sell-off is a good time to look at these two U.S. utility giants. Here's why Dominion is the better option.

Similar in many ways 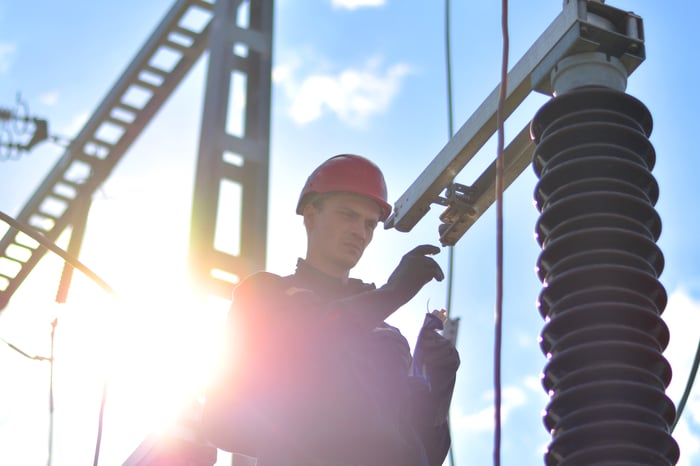 That said, their businesses are both more diverse than the customer counts above suggest. For example, both Duke and Dominion have been building merchant power businesses with a focus on renewable energy. And each has natural gas pipeline businesses, though Dominion is unique in that it has created a publicly traded limited partnership, Dominion Energy Midstream Partners, LP, to house some of its midstream assets. That allows Dominion to monetize those assets while still retaining control of them (more on this below) and benefiting from them financially.

Over time, both Duke and Dominion have performed relatively well, providing income investors a steady stream of dividends. Duke currently yields 4.6% and Dominion 4.5%, near their highest levels over the past five years. Duke's dividend has been increased for 13 consecutive years, while Dominion's dividend has gone up each year for 15 years. So far, these two large utilities are pretty similar. 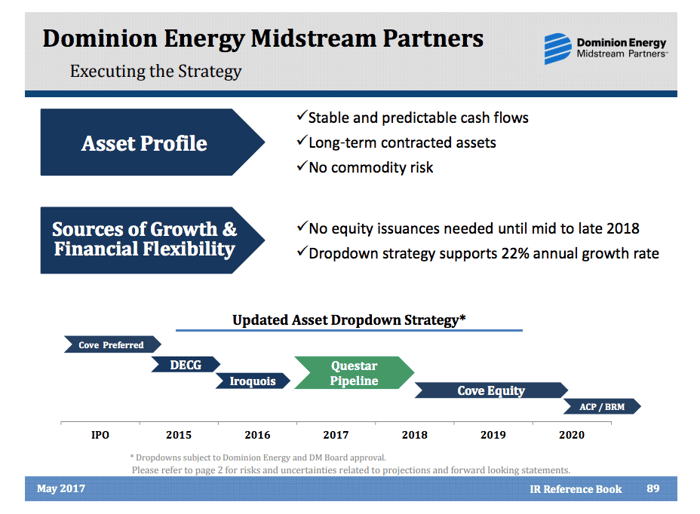 Dominion Energy is set to sell, or drop down, more assets to Dominion Energy Midstream Partners over the next couple of years. Image source: Dominion Energy Inc. IMAGE: https://investors.dominionenergy.com/static-files/3c97934e-1c35-49b7-bd6c-e8be0c3be51b Page 89.

It's on the valuation front where we start to see a difference. Both are currently trading below their five-year average enterprise value to EBITDA ratios. Duke, however, is only about about 2.5% below its five year average, suggesting it's trading at just a slight discount. Dominion is about 12% below its comparable figure, which is a far more compelling entry point for investors. But there's one more thing you need to examine before making your choice.

A closer look at dividends

Both Duke and Dominion are income investments. While Dominion's valuation appears lower today, which for some would be enough to make it a better value stock, to ignore the income component when considering these two stocks would be a huge mistake. Duke's slightly higher yield might, in fact, lead some to favor that company's shares. That could be shortsighted because it ignores the dividend growth prospects of each utility.

Duke has a number of attractive opportunities to grow its business, including capital investment in its regulated electric assets, growing its natural gas business, and expanding its renewable power portfolio. However, even with plans to spend $34 billion on capital projects between 2018 and 2022, Duke is only expecting to grow the dividend by roughly 5% a year.

Dominion's growth opportunities are similar, but there are a couple of notable differences. First, the company is in the middle of an attempt to acquire smaller peer SCANA Corporation. A successful purchase here would boost earnings growth but is not expected to impact the company's dividend plans. The second difference is more meaningful. Dominion's controlled limited partnership allows it additional access to capital, providing cash that management plans to use to pay down debt and reward shareholders. 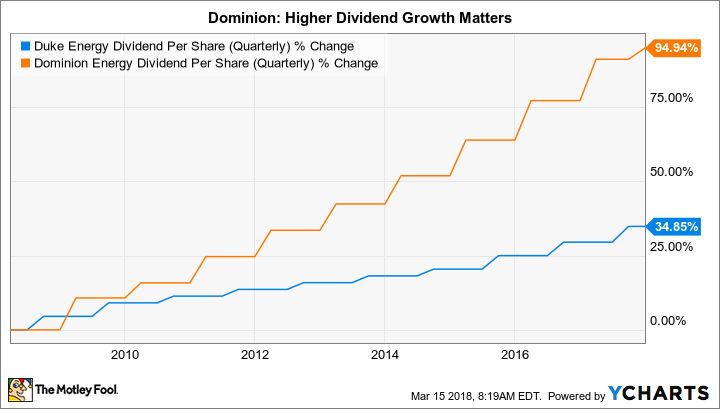 In addition, Dominion recently completed construction of the Cove Point natural gas liquefaction facility, a costly project that should soon start to add to results. The utility is also nearly finished building a new natural gas power plant (roughly 75% complete) with an expected in-service date in late 2018. So Dominion has already spent a lot of time and money on projects that are set to bear fruit. Thus, its capital spending plans could run as high as $4.2 billion per year over the next three years, less than what is expected at Duke, but dividend growth is projected to be as high as 10% a year. That's around twice what Duke is projecting and roughly three times the historical growth rate of inflation. And it's the real reason why Dominion is a better value investment than Duke when comparing these two currently out-of-favor U.S. utilities.

Go for the growth

Neither Duke nor Dominion is a shockingly undervalued stock today, even though Dominion's enterprise value to EBITDA ratio gives it the value edge. But utilities are generally investments prized by investors for their income generation, which is why Dominion's dividend growth projections make it a better value stock. You are getting a fair deal on a large utility with a sizable yield...and dividend growth potential that is materially better than what you'd get from Duke.