Lululemon Athletica (NASDAQ:LULU) will report earnings for the fourth quarter on Tuesday, March 27, after the market close. The yoga-apparel specialist has been building momentum over the past two quarters in its men's category and digital sales -- two important growth opportunities where management has been investing heavily. These two areas, along with international growth, will be in the spotlight when Lululemon reports fourth-quarter earnings. 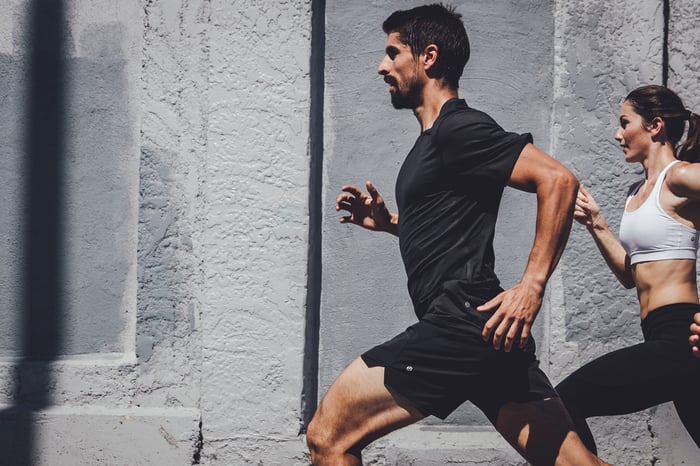 Guidance points to a strong quarter

The stronger-than-expected holiday shopping season caused management to raise guidance in January for both revenue and earnings per share. The new guidance calls for Q4 revenue to be in the range of $905 million to $915 million, which represents growth of 15% at the midpoint of guidance over the prior-year's comparable quarter.

Comparable-store sales -- which include direct-to-consumer sales -- are expected to be in the high single digits, which is consistent with the year-ago quarter.

Over the last few years, operating margin has been under pressure from management's increased hiring activity, as well as investments to grow the online sales channel. Most of the investment on the digital side is complete, which is expected to ease the pressure on operating margin in Q4. As a result, non-GAAP earnings per share (EPS) are expected to grow 26% over the year-ago quarter, to between $1.25 and $1.27 per share.

The 3 things to watch

While management continues to open stores in North America, the three biggest growth opportunities are in the e-commerce, men's, and international sales categories. How well Lululemon does in these three areas will define how the company performs going forward.

1. Direct to consumer (DTC): This channel includes online sales and made up 21.2% of total revenue in the third quarter. DTC growth has been hovering between 26% to 29% over the past two quarters, which is the highest level of growth for the channel since fiscal Q4 2015.

Management has invested heavily in its online business, with a total makeover of the website presentation over the last year, which seems to be attracting more customers. They are also blending the in-store shopping experience with online by allowing customers to pick up online orders in-store, as well as ship from the store. These additional services seem to be paying off, as well.

The fourth quarter should be another strong one for Lululemon's DTC channel given record traffic and online sales reported for Black Friday.

2. Men's category: Growing the men's category has been an area of focus for several years, and management began to make real progress last year with innovation and marketing. The ABC pants have been a big hit with men, with sales doubling in the third quarter over the year-ago quarter. Strong sales in men's pants is really important because it's typically the introductory product to the brand for men.

Lululemon has been gradually expanding on core items like Metal Vent Tech tops and ABC pants with additional styles and colors. The company followed up this investment in men's assortment with its first-ever marketing campaign targeted at men. In the third quarter, the company reported a 21% increase in new male guests who purchased an item.

Given the momentum and new marketing campaign, investors should watch for more good news out of the men's category when the company reports fourth-quarter earnings.

3. International growth: The brand has a lot of potential in China, which has more than 400-million millennials and a government that's initiating a plan to encourage a more healthy lifestyle through 2030. Lululemon is on the ground and scoring big, with near triple-digit growth rates with its stores in Chinese cities. The company's growth in China ties in with the overall growth plan for online sales since management expects online penetration to eventually reach 40% to 50% of Lululemon's business in China.

The recent resignation of former CEO Laurent Potdevin caught everyone off guard, but investors haven't been bothered by the news. Lululemon is performing really well in a difficult retail environment when other retailers are closing stores. No matter who takes over the reigns, the new CEO will take over a strong brand that's showing signs of hitting its former stride and is positioned to capitalize on a growing athletic-apparel market.