Shares of Seritage Growth Properties (NYSE:SRG) have gone nowhere since the retail real estate investment trust (REIT) was spun off from Sears Holdings (NASDAQ:SHLDQ) in mid-2015.

In the long run, Seritage hopes to significantly boost its net operating income (NOI) and funds from operations (FFO) -- two key profit metrics for REITs -- by redeveloping Sears and Kmart stores for higher-paying tenants. In the short run, those efforts have been overwhelmed by declining rental income from Sears Holdings as it closes and downsizes stores. 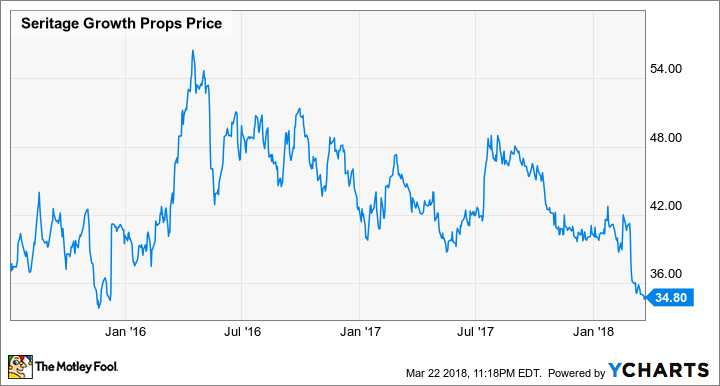 However, investors got a reminder of the value of Seritage Growth Properties' real estate last Thursday. The company sold a 50% interest in one of its flagship properties to an affiliate of investment manager Invesco for a hefty sum of $50 million. There could be more deals of this nature in the next year or two.

The master lease between Sears Holdings and Seritage is structured to ensure that the underlying real estate is put to its best use. Sears has the right to terminate the leases for stores where it is losing money (although it is limited to terminating 20% of the leases by value in any given year), while Seritage can recapture at least 50% of each property's square footage with a few months' notice.

Beginning in September 2016, Sears has aggressively made use of its termination rights. As a result, it vacated 55 properties during the course of 2017, representing nearly 20% of Seritage's total square footage.

Seritage has also exercised its recapture rights at dozens of properties in the past two years. Meanwhile, most of the redevelopment projects that will bring in new tenants at higher rents are still in progress. As a result, Seritage's NOI and FFO have been squeezed from both sides.

The declines in rental income aren't just making Seritage's current earnings look bad. From a longer-term perspective, some investors are worried about whether Seritage will be able to raise the capital it needs to complete its redevelopment projects. (As of the end of 2017, Seritage had more than $800 million of additional spending budgeted to complete the redevelopment projects that were in process.) At the time of its inception, Seritage Growth Properties had 50-50 joint ventures with several leading retail REITs. Together, these JVs owned 31 properties.

In the second half of 2017, Seritage sold its 50% interests in 13 of those properties to its partners. It also contributed another five properties to a joint venture with GGP, a shopping center REIT. These transactions netted more than $300 million, while also relieving Seritage of a 50% share of the redevelopment costs for those assets. This enabled it to pay down debt and partially funded other redevelopment projects.

On Thursday, Seritage announced a new joint venture with Invesco Real Estate. It has sold a 50% interest in the shuttered Santa Monica Sears store, which is being transformed into a mixed-use retail and office development called The Mark 302.

The deal values The Mark 302 at $145 million, including costs necessary to complete the project. Seritage received $50 million of cash proceeds, which it used to pay down its mortgage. The other $22.5 million will presumably come from contributions to pay for redevelopment work.

In its 2017 annual report, Seritage Growth Properties noted that it plans "to partner with leading capital providers and developers" for many of its larger-scale projects. Thus, more JV deals are likely, either for the other two premier projects that are underway -- Aventura, Florida, and San Diego (La Jolla), California -- or some of the other large-scale projects that haven't been approved yet.

These joint venture structures make sense for Seritage, as long as it is getting fair value for the 50% interests it is selling. (The Santa Monica deal values that property at more than $1,000 per square foot, which seems reasonable. For comparison, Seritage's enterprise value equates to less than $100 per square foot.) Seritage is asset-rich but cash-poor, so it needs to raise capital somehow. Selling 50% interests in part of its portfolio at around fair value will be better for shareholders in the long run than issuing equity or debt at unfavorable prices.

The Santa Monica site's valuation shows that it doesn't take many real estate gems to justify the company's market cap of approximately $3 billion. Even if the bottom half of Seritage's portfolio isn't worth very much, the stock should trade for far more than $35.