The mood on Wall Street seems to swing daily on the outlook for trade, and on Monday, stocks rose on an optimistic view. The Dow Jones Industrial Average (DJINDICES:^DJI) was up over 400 points intraday, but drifted down in the afternoon. The S&P 500 (SNPINDEX:^GSPC) also hung on for a small gain.

As for individual stocks, Novartis AG (NYSE:NVS) announced it is buying AveXis (NASDAQ: AVXS), and Leucadia National Corporation (NYSE:JEF) said it is selling off assets and taking a new name. 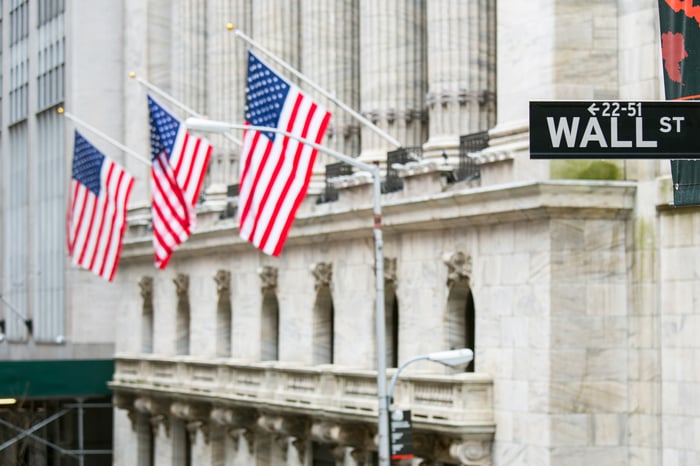 Swiss drug giant Novartis announced it is paying a huge premium to buy gene therapy specialist AveXis, sending shares of that company soaring 81.6% to $210.46. Novartis, whose stock also rose on the news, is paying $218 per share in an all-cash deal worth $8.7 billion.

Clinical-stage AveXis specializes in developing treatments for rare and life-threatening neurological genetic diseases, and the most immediate prize for Novartis is its therapy for spinal muscular atrophy (SMA) type 1, AVXS-101. The disease is the No. 1 genetic cause of death in infants, and AVXS-101 is a one-time gene replacement therapy that has had clinical success treating it. The company is also working on treatments for Rett syndrome and genetic amyotrophic lateral sclerosis (ALS).

For Novartis, the pricey acquisition is a way to build on its gene therapy program, which currently is focused on CAR-T treatments for cancer. If AVXS-101 is successful, it would compete with Spinraza, one of the world's most expensive drugs, and which also requires ongoing treatment over the life of the patient.

For AveXis shareholders it was a big payday, and the deal boosted stocks of other companies in the gene therapy space, especially those of REGENXBIO (NASDAQ:RGNX), which is partnered with AveXis to provide the virus-based gene delivery technology for all of the company's therapies. Shares of REGENXBIO soared 15.6% on the news.

Shares of diversified conglomerate Leucadia rose 11.6% after it announced it is divesting its auto dealer group and a portion of its stake in its beef cattle business and renaming itself Jefferies Financial Group in order to focus on its financial services business.

Leucadia is selling 48% of National Beef, up to now one of the company's two biggest businesses, to Marfrig Global Foods S.A. for $900 million in cash, reducing Leucadia's ownership in National Beef to 31%. It is also selling 100% of its equity position in the Garcadia auto dealer group to the Garff family for $375 million in cash and $50 million in redeemable preferred equity.

"The National Beef and Garcadia deals complete Leucadia's transformation from a highly diversified, but relatively random, group of assets before the combination with Jefferies into a financial services company with clear focus and drive," said CEO Rich Handler and President Brian Friedman in the press release. "The proposed name change is intended to reflect that we now will be a diversified financial services company, rather than one that is more broadly focused, and Jefferies is by far our largest business and our engine of opportunity."

The moves were consistent with comments the company made after reporting a strong 2017, when it mapped out its vision to become a combined investment banking and merchant banking platform, building on the success of its Jefferies Group unit. Investors cheered this latest capital allocation move.