Wednesday was a down day for the stock market, with the Dow Jones Industrial Average posting triple-digit losses even as broader benchmarks had much smaller moves. Market participants largely focused their attention on the inflation front, as March consumer price index numbers showed a 0.2% rise in the core rate excluding food and energy. Year-over-year price changes have accelerated, seemingly giving the Federal Reserve more justification to continue raising interest rates. Yet even though many stocks generally react unfavorably to inflation fears, there were some big gainers that had good news. Hilton Worldwide Holdings (NYSE:HLT), Pretium (NYSE:PVG), and Applied Optoelectronics (NASDAQ:AAOI) were among the best performers on the day. Here's why they did so well.

Shares of Hilton Worldwide Holdings rose 6% after faring better than some had feared following a major shareholder selling off a big portion of its position in the hotel company. Chinese conglomerate HNA Tourism Group offered 60 million Hilton shares in a secondary offering, and the price had sagged in recent sessions as investors worried that the sale of a roughly $4.4 billion stake in the company would cause a big disruption in the market. But after the news came out that the offering had priced at $73 per share, the stock pushed higher, and investors seemed to take heart from the fact that neither the company nor any corporate insiders took advantage of the offering to sell shares of their own. 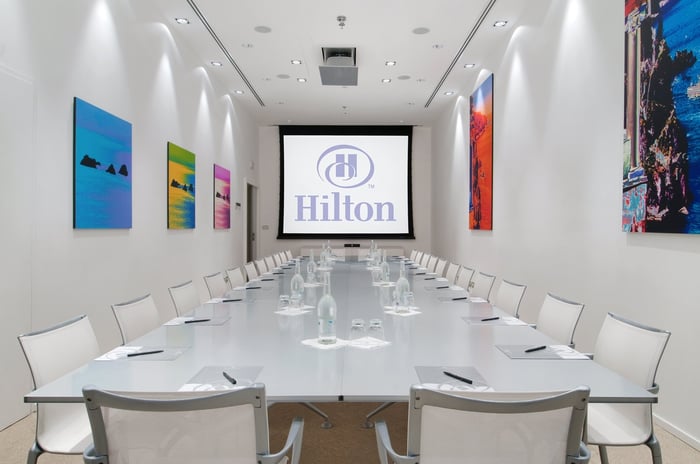 Pretium Resources stock soared 19% in the wake of the company's release of a production report on its Brucejack mine in northern British Columbia. The mining company said that it had produced more than 75,000 ounces of gold from Brucejack during the first quarter of 2018, processing more than 260,000 metric tons of ore and seeing production steadily rise throughout the quarter. Pretium also confirmed that it's still on track to meet its production guidance for 150,000 to 200,000 gold ounces during the first half of 2018, with all-in sustaining costs estimated at $700 to $900 per ounce. With the rate of underground development accelerating and with gold recovery rates approaching 97%, Brucejack appears to be pulling its weight so far for Pretium.

Finally, shares of Applied Optoelectronics jumped 14.5%. The fiber-optic component specialist earned favorable comments from stock analysts at Rosenblatt Securities, who said that the company seems to be having a competitive turnaround. Social media and e-commerce giants have started to look to Applied Optoelectronics to meet their fiber-optic needs, turning less to Chinese competitors with less reliable goods. As long as those trends remain in place, Applied Optoelectronics will have an opportunity to build market share at the expensive of less nimble industry rivals.