Please ensure Javascript is enabled for purposes of website accessibility
Log In Help Join The Motley Fool
Free Article Join Over 1 Million Premium Members And Get More In-Depth Stock Guidance and Research
By Dan Caplinger – Apr 17, 2018 at 9:40AM

Find out how the Actelion acquisition also helped produce blockbuster results for the healthcare giant.

It's hard to find a broader-based healthcare company than Johnson & Johnson (JNJ 1.48%). With exposure to everything from the most sophisticated medical devices and specially formulated prescription drug treatments to the items you've been buying off of drugstore shelves for years, J&J has its hand in everything related to healthcare. Despite taking a substantial one-time tax hit due to recent changes in the tax laws, Johnson & Johnson has been able to produce solid earnings even with some of its most successful treatments having lost patent protection and seeing a falloff in sales.

Coming into Tuesday's first-quarter financial report, Johnson & Johnson shareholders were optimistic that the company would see its bottom line rebound as the positive impacts of tax reform would supplement solid fundamental business performance. J&J's numbers were largely better than most had expected, thanks in part to strong performance from some of its most important treatments in the prescription drug segment, and the healthcare giant sees reasons to be even more excited about the rest of 2018 and beyond. 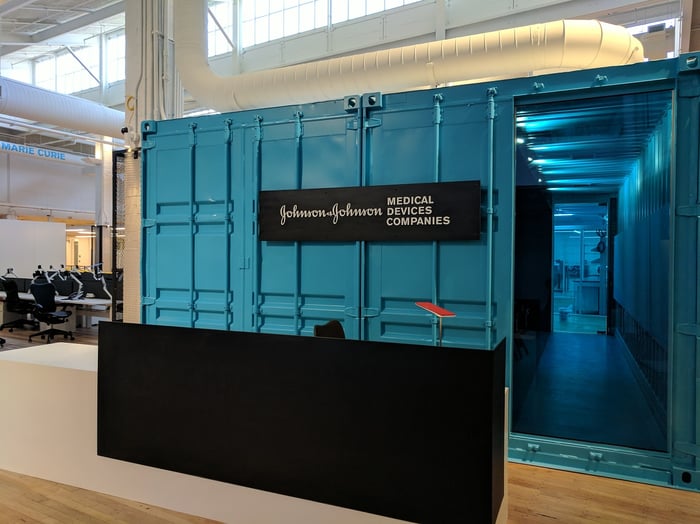 A big win for big pharma

Johnson & Johnson's first-quarter financial results confirmed the double-digit growth investors saw in the fourth quarter of 2017. Sales jumped almost 13% to just above the $20 billion mark, which was far better than the consensus forecast among investors for just $19.4 billion on the top line. Adjusted net earnings were higher by 12% to $5.64 billion, and that resulted in adjusted earnings of $2.06 per share, topping the $2.01 figure that most of those following the stock were expecting to see.

Johnson & Johnson got a huge positive impact from the falling U.S. dollar. Currency impacts were responsible for a full third of J&J's overall reported sales growth, with operational sales climbing 8.4%.

From a segment perspective, pharmaceuticals continued to be the growth leader for the healthcare conglomerate. Gains in currency-adjusted operational revenue of 15.1% for the segment came about half from the Actelion acquisition and half from organic growth, and the company cited both new products and the strength of core products in boosting pharma sales. In particular, sales of prostate cancer treatment Zytiga and anti-immune biologic Stelara grew the most in pure dollar terms, with the U.S. Food and Drug Administration having approved an additional indication for Zytiga to help boost its revenue. J&J also pointed to newer products like Darzalex and Imbruvica in the oncology area as growth drivers. International markets were key for Johnson & Johnson's pharma segment, where growth came at more than double the rate of U.S. gains.

Other segments grew more slowly. The medical devices unit saw operational sales increases of 3.2%, but without the recent acquisition of J&J's surgical vision business, domestic sales would have fallen, and worldwide operational sales growth would have been limited to just over 1%. Diabetes care and spin products were weak, offsetting strength in contact lenses along with endocutters and trauma products. The consumer segment saw even slower growth, with operational increases of just 1.3% as poor performance in domestic baby care products offset gains in beauty products like Neutrogena and Aveeno.

CEO Alex Gorsky was happy overall. "Our pharmaceutical business continues to deliver robust growth," Gorsky said, "and we are pleased with the improvement in our consume business. In our medical devices business, we have areas of leadership and continue to make investments and portfolio choices to improve performance." The CEO also pointed to the opportunity to invest tax savings in research and development and capital spending over the next several years.

Johnson & Johnson raised its sales guidance for 2018. The healthcare giant now believes it will bring in between $81 billion and $81.8 billion on the top line, which is $400 million more than its previous guidance. However, the company didn't make any changes to its call for between $8 and $8.20 per share in adjusted earnings for the full year.

Of particular interest for investors will be how Actelion's business performs going forward. The company brought in $585 million from pulmonary hypertension drugs from the acquisition, including more than $270 million from Opsumit and $140 million each from Tracleer and Uptravi. Johnson & Johnson is counting on the acquired business continuing to pay off well into the future.

Johnson & Johnson investors didn't seem to have any major reactions from the news, and the stock was higher by just less than 1% in premarket trading following the announcement. As long as blockbusters like Zytiga and Stelara keep gaining momentum, J&J should be able to keep growing well into the future.