Find out the key numbers to follow when the video game titan announces earnings results next week.

Activision Blizzard (ATVI -0.83%) wants to become an entertainment giant that, like Disney (DIS -1.39%), can monetize its portfolio of intellectual property through media channels including television, movies, and consumer products. At its core it remains a video game developer, though, that produces titles aimed at delighting a growing base of engaged gamers.

Thus, while exciting new business lines like advertising and esports might draw investors' attention when the company announces first-quarter earnings results on May 3, the key operating trends to watch will be the same ones that have powered Activision's growth over the past few years.

Let's dive into these key metrics. 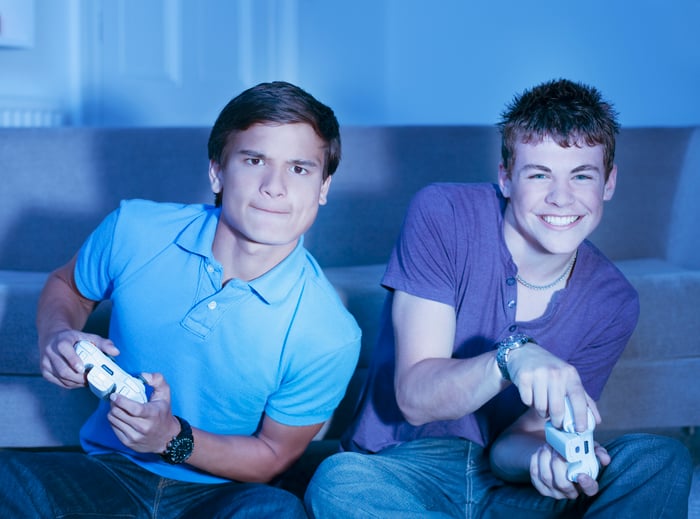 As is the case with any entertainment platform, audience size is critical to Activision's business. And while Disney keeps close tabs on its subscriber base with respect to TV network channels like ESPN, Activision follows its player count, or the number of gamers that engage with its titles each month.

Its overall audience stood at 385 million gamers at the end of 2017 compared to 447 million a year ago. That slump was entirely due to a shift in the casual-gamer base at its King Digital segment. The Activision side of the business, on the other hand, reached a record 55 million active users last quarter, up from 51 million a year ago, on continued strength in the Call of Duty franchise. Blizzard's 40 million gamer base, meanwhile, shrunk as the developer had no major new game releases on its calendar in 2017. Activision will update investors on each of these audience metrics this week, and we'll find out whether the prior quarter's slight sequential uptick marked an end to a string of declines.

The average American watches about five hours of TV each day, making it a lucrative platform for both content owners and advertisers. Activision's engagement doesn't come close to that result, but the total number of hours that gamers dedicate to its titles does rank it among the biggest online platforms including Facebook and Netflix.

Across its three divisions -- King Digital, Activision, and Blizzard -- gamers spent over 50 minutes per day playing the developers' titles last quarter. That rate held steady against the prior quarter, which was a record for the business.

The metric could rise significantly from that level, especially if its casual-gamer base stabilizes. Activision supplements that direct engagement through passive consumption of its game play, too. The company boasted seven of the top 20 games on the Twitch streaming service last year, for example. It's no surprise then that management believes advertising will eventually become an important revenue stream.

The shift toward digital game delivery has had a profound impact on Activision's earnings power. Its titles have longer shelf lives thanks to easily purchased content like expansion packs. The company is also less exposed to seasonal sales swings. Revenue in the holiday quarter last year accounted for 36% of the total, down from almost 50% two years ago.

There's also huge long-term potential for in-game sales of virtual goods. But microtransactions can backfire if taken too far, as rival Electronic Arts experienced with its recent Battlefront II game. However, both EA and Activision expect the sales channel to keep growing and provide another key revenue stream for their gaming titles. Activision logged $1 billion of revenue in microtransactions last quarter, which demonstrated that demand isn't letting up for these digital products.

If recent history is any guide, surging digital demand might convince CEO Bobby Kotick and his team to lift their full-year growth target on Thursday. That forecast currently calls for sales to rise by 4% in 2018, to $7.4 billion.